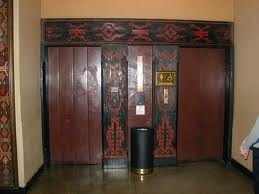 This Stanley Kubrick classic has been given a limited cinema re-release here - including, for the first time, an additional 20+ minutes which were cut from the European release in 1980. These deleted scenes had already been part of the American release earlier that same year, but which Kubrick then removed, having been stung by the unenthusiastic or even hostile American reviews. He actually came to prefer his own shorter version, which is also the one I have on video. I'd already seen the film at least three times in the cinema as well as twice or more on video so I did know the edited version quite well. The longer film has, I believe already been shown on TV here (probably late at night) but this was the first time I myself have seen it in this cut.
The restored scenes mainly come near the beginning of the story, relating to the Torrance family's background and a reference to their son Danny's being accidentally(?) injured by his father. There are also a couple of later short scenes involving Scatman Crothers' chief cook character's failed efforts to make contact with the snowbound hotel.
I thought that the restored minutes, although not crucial, did assist in making a bit more sense to the tale and generally helped rather than hindered the depiction of the family's isolation in the hotel's inaccessible location.
On first seeing 'The Shining' 32 years ago I recall feeling some irritation about the film not following the book, with very significant departures in places. I'd only recently discovered Stephen King and I had just started devouring his works avidly. He could do no wrong for me at that time and for a few years still to come. But around that time I didn't appreciate, to the extent that I do now, the acceptability of a film-maker to alter a story from the printed page. I had been expecting a faithful and literal transposition from book to screen. That had been my major disappointment. But despite this major reservation, I was still quite overwhelmed by Kubrick's style and technique, and even now it leaves me full of admiration. But then Kubrick is probably my favourite director of all. However, one thing I would say, is that, as with another favourite director, Hitchcock, I sometimes find that there are wonderful 'set-pieces', but they add up to rather more than the film as a whole. In other words, the feeling of overall satisfaction with the film after it is over can be less than the memory of the depiction of certain key moments during its progress. This is actually less applicable to 'The Shining' than to certain of his other films such as his following 'Full Metal Jacket' and his final work, 'Eyes Wide Shut'.

When it comes to giving the film a score, I was tempted to duck out of it this time as it's difficult to judge a film anew which was already known well from an 'incomplete' version. But if a gun was to be depressed against my temple I'd feel compelled to offer a rating of..........................8/10


Btw: I did find myself paying more attention to background features this time round, looking for extra significances - pictures on walls, furniture arrangements and decor, labels on boxes and tins of food etc, but didn't find anything noteworthy.
This same cinema was also showing the new film 'Room 237' (referring to the mysterious hotel room to which Danny is inexorably drawn), a documentary about some whacky theories and observations about 'The Shining', with a number of over-zealous fans of the film mentioning arcane allusions they believe Kubrick had put into his film, playing with his audience. Would dearly love to have seen it, but the timing and further expense put it beyond me. Really must try to catch it when it comes on TV.