Why gay marriage IS unnatural..... 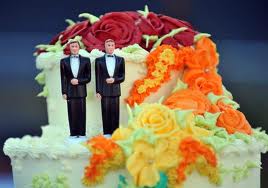 .......is because ALL marriage is unnatural.

Leaving aside humanity for the moment, where else in nature does marriage occur without the intervention of a separate agency to activate and formalise such a relationship? Doubtless some would argue that the institution has been bestowed uniquely on man by 'God'. Even if that were true that doesn't automatically make it 'natural', otherwise those who wanted to be in such a wedded state would suddenly find that they were experiencing it without having to instigate the process. Now that would be natural! (and pretty miraculous too!)

Whether monogamy is 'natural' in humans is debatable. In the 'natural world' it seems to depend on the species of being which is involved. But even where it's majority within that species it's hardly ever an entirely  exclusive one. Monogamy may work for some humans and not for others - and for that reason why should one pattern be decreed as the only acceptable and viable one for all humanity?

In our wider lives, here are just a very few of the 'unnatural' practices most of us engage in:-
Wearing clothes - cooking food - having haircut/shaving - putting on make-up/cologne etc - driving/flying -  taking medicines - undergoing surgery - wearing spectacles/contacts.........the list goes on and on.

Those who freely bandy about the 'un' word talk as though 'unnatural' is a synonym of 'undesirable', which is basically what they mean - but 'undesirable' only to them and to others who share their views.

It galls me to see a person going on and on about 'unnatural' acts while, particularly if it's a woman, sitting there with face made up to the eyebrows (literally!), lipstick, hair impeccably set, foundation cream, eye-liner and who knows what else, all in an attempt to improve on the body that her very own 'God' has given her -  and failed, because she found it unsatisfactory - and, presumably, wants to make it more attractive to men.  They've really got to use an argument other than endlessly bleating on against those who are being 'unnatural'.

Or perhaps they want to confine the use of that word solely to matters sexual - in which case they can join the 'Holy Father' and condemn all artificial contraception, by whatever method  - though he doesn't seem to be too concerned about it these days, unless it might help to prevent HIV transmission, in which case it's definitely against God's rules.
Then how about enforced labour in pregnancy and Cesarian deliveries? Aren't they unnatural too?

I'm as sure that marriage is as desirable for some as it is not for others, and both can easily apply to the same one person or couple at different times.. That doesn't mean the same automatically holds true for everybody at all times.

To go back to the beginning, if male-female marriage is the only 'natural' one, surely that must also mean by extension that divorce is also natural, despite Biblical strictures against it (and specifically, on grounds other than 'fornication'). Or am I missing something?