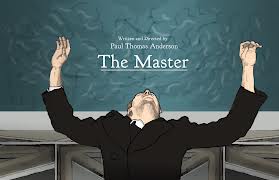 Better say at the start that this film does NOT have anything at all to do with the founder of Scientology, one L. Ron Hubbard. No Sir-ee!!! Nichts, nada, rien! Right, having now got that out of the way......

Philip Seymour Hoffman plays an L. Ron Hubbard-type character, charismatic leader of a cult which believes in multiple past lives (over trillions of years!) and emotional cleansing and spiritual advancement by regressing the individual to these previous incarnations.
He takes Joaquin Phoenix's character (an ex-naval officer with mixed-up life and a very short fuse) under his wing. There's a strange mutual attraction between them, though no indication of anything even slightly sexual. Both are menacingly overbearing in their different ways and, of course, sparks fly. It seems that 'The Master' is almost grooming his new pupil to be an acolyte of his, though it doesn't actually develop this far.

It's an odd film, alternately fascinating, puzzling and frustrating - but certainly never dull.
Both the lead actors produce tour-de-force performances (with an Oscar tag?), each larger than life but still on the safe side of believable. I think Hoffman nails his character the more successfully, though they are both very good indeed (When has P.S. Hoffman ever been less than very good?).
One complaint which I do have is that the Phoenix role is played with a slight facial deformity which makes him slur words out through the side of his mouth. There were times when I just couldn't decipher what he was saying while being able to follow the person he was conversing with.
Also, I was confused by the opening scenes where there isn't a linear progression from one scene to the next, leaving me feeling like it was a jigsaw one was supposed to arrange oneself, though I found that more confusing than interesting. However, as the film goes on it becomes less of a problem.
Further still, a number of scenes have tension worked up or a conflict begun only to have that scene suddenly stop, leaving me wondering about any resolution, if there was one.
On the plus side I ought to say that in my opinion the background score of original music was of unusually high quality.

On the whole, it's an intriguing film concerning an unusual subject. Bearing in mind that it's well over 2 hours long and I'd gone to it having suffered minimal sleep last night (pussy-care problems) it did hold my attention throughout.
So just on that factor alone, I think a fair score for 'The Master' would be........6.5/10
Posted by Raybeard at 08:48