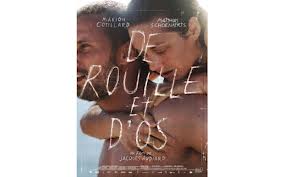 If it were not for 'Oscar talk', I would have avoided this film. Two reasons :-
a) It features animals in a significant part  - even though in this case they are killer whales which, actually, turn out not to be on-screen for long.
b) Bare-knuckle fighting - again, not seen for long on the screen.
I always give a wide berth to films concerning boxing, which I find boring and completely without any attraction at all, even repulsive. Fighting as depicted here where nothing is barred (entirely illegal, naturally) is boxing times two.

She is a trainer of performing killer whales at a sea-life centre - he a bouncer (a single parent to an infant boy) at a night club where they encounter each other. He takes her back to her home after a certain incident, leaving his telephone number. She is involved in a major disastrous event - 'life-changing' is hardly adequate to describe it. (Anyone who has read reviews of this film will probably know what it was.)
They arrange to meet up again. Friendship develops. Then a physical relationship, which is more functional than romantic. Inevitably, something deeper develops between them. He then suddenly has to leave where he's staying and goes away without telling her where he's gone. But following a further dramatic and shocking event a few minutes from the end of the film the two come together again.
Even if I try my best to put aside my prior unfavourable disposition towards the film, I fail to see what all the fuss is about. It strikes me as no more than an efficiently made film, with some necessarily clever filmic tricks revealing Mme Cotillard as having a particular physical condition.
Assuming the film gets Oscar/ BAFTA nominations I can't imagine either body giving the award for 'Best Picture' to a French film for the second consecutive year (after this year's 'The Artist'). Perhaps she will get recognition for her role, but if she does I think it will be for the part she plays rather than the standard of the acting of it.

No real surprise that I was disappointed overall, but I'd actually been hoping to witness something really 'special' to justify all the buzz and the superlatives being lavished on this film. Reflecting my general downbeat assessment, 'Rust and Bone' earns a score of............3.5/10