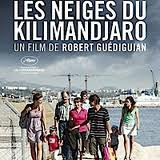 (No, not a re-make en francais of the 1952 Gregory Peck/Ava Gardner version of the Ernest Hemingway novel).

Likeable, unassuming, family drama.
Set in Marseilles where local trade union boss at shipyard is made redundant, along with nineteen of his fellow-workers. As the propelling event of the film happens towards its start it doesn't give much away to say that shortly after his redundancy he and his wife become victims (with two visitors) of a somewhat violent masked robbery at their home. Soon, by one of those co-incidences that rather stretches credulity, he just happens to witness a thread that enables him to uncover the identity of one the perpetrators, which turns out to be someone with whom he'd been already acquainted. The main body of the film concerns the couple's attempts to come to terms with the criminal, the latter's family and his motivation - as well as the attitude of the their own children.
It's a modest affair and all the better for it, though I personally could have done with an ending a bit more hard-edged than the touchy-feely one we are served up with. But, on the whole, it's a satisfying and good production.

I've seen a few films recently which have featured one or two 'hotties' of whom I wasn't aware or knew only slightly - and here comes along another one. A cuddly 'Daddy-hottie' - who, I find, is actually seven years younger than I am! Never mind, I still find him beautiful. He is Jean-Pierre Daroussin, playing the male lead.

He really presses all the right buttons for me.

Btw: The misleading title refers to the projected holiday which the main pair were due to have but, due to the robbery, have to cancel. A different English title might have been helpful.