New film: 'KEEP THE LIGHTS ON' 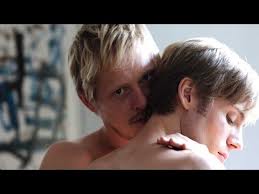 After yesterday's high-value, heart-in-mouth entertainment, this one brings me down to earth with a hefty bump.
A largely sombre, totally humourless saga, set in New York, involving a 30s-something documentary film-maker (with a rather attractive, sweet face - here, the one on the left) in an on-off gay relationship with a vacillating young lawyer who can't bring himself to commit. Throw in a bit of casual sex, telephone sex, dope-smoking - and that's about the sum of it.

I think the trouble is that I just couldn't care much about this couple. There's nothing surprising about their difficulties - a lot of us have been through something very similar, maybe more than once. Nothing violent or spectacular happens, the film merely charts the ups and downs of their emotions, leaving me thinking "So what?".
I was wondering if the whole thing could have been improved by shaving, say, 20 off from the film's 100 minutes, but I doubt if that would have made all that much of a difference.
No doubt some will relate to the couple's difficulties more profoundly than I did. But, only able to speak of my own experience, I give 'Keep the Lights On' a one stage lower than unremarkable.............3/10.
Posted by Raybeard at 08:39