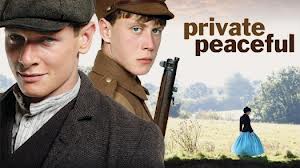 ( The title of this British film is not a nickname, as I'd thought, but an actual surname).

Based on a novel by Michael ('War Horse') Morpurgo, this film also concerns World War I.
A work of two halves, the first part concerns two soon-to-be fatherless brothers growing up, first at school, then as farm labourers, and the younger one's jealousy at his brother's courtship and getting pregnant a girl whom he also fancies.
I found this first half a little too meandering and it takes the outbreak of war and the brothers' enlistments into the army to give the story a much stronger focus.
Incidentally, knowing who the author was I had misgivings about seeing this film as I'd already deliberately avoided seeing the Spielberg film for the plain reason of not wishing to be visually assaulted by the depiction of suffering animals (despite the usual disclaimer, "No animals were harmed during....etc"). So I had to grit my teeth when a point comes in this film where the army requisitions two of the farm horses to be engaged in the war. But apart from a very brief shot of a killed horse there was no further cause to be upset.
The film begins with one of the brothers being court-martialled without it being stated why. It then turns the clock back to the brothers as boys. We only discover what the deed was towards the end of the film. I did find the conclusion quite moving.