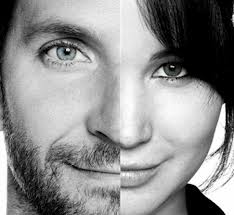 I was impressed by this. The pivotal characteristic for the central role - played by dishy Bradley Cooper (Man, this guy gets sexier by the day!) - is bipolar disorder, a subject rarely treated on film and, as far as I know, never a feature assigned to a sympathetic role as this is.

He has just emerged from months in a mental institution, subject to restraining orders, and returns to his parents (Robert de Niro in fine, mellow form) and is set on rebuilding his marriage with his estranged, unfaithful wife.

I was aware of some of the criticism of cliched portrayal of a character with bipolar condition - erratic behaviour, mood swings, propensity towards violence which sometimes turns on the use of a single word - all that is here, it's true. I have, in my own volunteering work come across a few people with this condition (not wishing to come over as 'superior', I own that I do have my own issues as well!) and, from my own experience, there may be some truth in the criticism, though I don't think it's overplayed here.
He happens to meet a pushy and disdainful female with such an unattractive personality that I just couldn't see why he wants to cling to her like a leech. In addition, she has her own bagful of mental health problems. I suppose it must be a tribute to the acting skills of Jennifer Lawrence which made me feel so strongly negative about her from very first appearance. But see a lot of her he does.

The screenplay is sharp, the acting and direction consistently well-observed. My only major reservation is in the ending - one that neatly ties up the loose ends with everyone happy, just like a fairy-tale. I've just read a review on IMDb which praises the ending in avoiding cliche. I disagree totally. That is precisely what it is. I can hardly imagine an ending which could be better designed to give everybody a 'feel-good' as they leave the cinema. But in the totality of this two-hour film, the complaint is relatively minor.