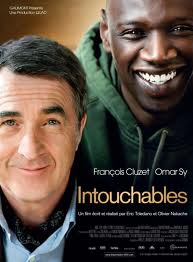 This has been a massive domestic hit in its native France, and it was surely that which had given me high expectations.
Not only is it the second successive film I've seen which is French but both films concern a chalk-and-cheese friendship between a wheelchair-bound individual and an unlikely helper. I'm not qualified to say which was the 'superior' film (if one can make such an absolutist value-judgment) but I know that I thought that this was better 'entertainment' than 'Rust and Bone' - though I do have reservations in making that claim.

Out of an array of applicants for the post, a wealthy quadripligic, with high-brow tastes in art and music, chooses a street-wise, clownish, dope-smoking, rather rebellious job-seeker (who's also into 'Earth Wind and Fire' big time!) as his live-in assistant/helper/nurse. Although one can guess, early on, the trajectory arc this film will follow, it ought to be said that it purports to be based on a true story. In fact, at the film's close we actually see, for a few seconds, the real-life couple at the heart of the story.

At the very well-attended showing I went to at 11 o'clock this morning, there were raucous laughs from the audience at the helper character's antics almost from the word 'go'. I didn't think it was that funny. (Maybe the audience was playing up to its own expectations?). In fact I very soon found the character just plain annoying. Truth to tell, it took practically the first half of the film before I warmed to it at all.
I did find his expoundings on classical music amusing - and his visit to the opera was genuinely very funny - as were some of his gauchely direct and tactless approaches to one or two of the women employed in the man's home. On the other side I was irritated at being shown the man's face so often trying to contain his laughter, as though we were being told "It's okay to laugh at this." I think that particular point was overdone.

I can just about see why it was such a success in France. It might be termed a 'feel-good' feature, and there's nothing wrong with that.
But when I balance up what were for me the good points against its negatives I cannot award 'Untouchable' more than.......................6/10.