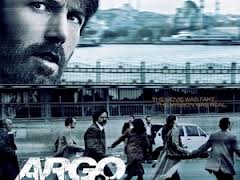 I thought this a cracking good film. It got my adrenalin pumping from early on and it doesn't really let-up until the big rescue is over. It's all the more remarkable in achieving that feat in view of the fact that we know beforehand how it will turn out. (The film 'Apollo 13' accomplished the same, and this is quite as successful in that respect as that film was.)

Those of us who lived through and remember the hideously prolonged American hostages incident in Iran in 1980 were never aware of this parallel drama being played out simultaneously. Actually, I don't even recall the lifting of the embargo on details of the affair in 1997. I suppose that by then it was regarded as a curious footnote to history, but the situation was no less harrowing.
This film concerns the fate of six American embassy workers in Tehran escaping to take refuge in the Canadian embassy after the former premises is invaded and ransacked. By a ruse that is hardly credible it is decided to effect a rescue by flying them out of Iran using a pretence of their being a group of Canadian film-makers who had been looking for a suitable location to film their projected science-fiction production, entitled 'Argo'.
Ben Affleck, as director as well as principal actor, really knows how to turn the screws. There are a few very brief moments of humour which are, very sensibly, kept in check - and being delivered by the ever-watchable John Goodman as well as the now-veteran Alan Arkin, the appearances of these two only add to the film's pluses.
Incidentally, over the final credits, when we see photographs of the actual people who had been involved in the escape, the resemblances given to the actors playing them is quite uncanny - something that is usually not the case in dramatic reconstructions.
This is without doubt the most sustainedly suspenseful film I've seen this year.