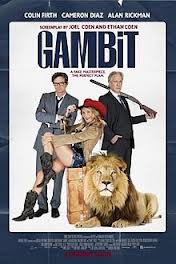 This is a 'sort of' re-make of the 1966 Shirley Maclaine/Michael Caine/Herbert Lom feature, which I did see very many moons ago but have now completely forgotten. So I come to this re-filming, like most people will,  virtually 'new', unable to make a comparison. (My film reference books tell me the original was well-regarded).
I suppose it purports to belong to the category which we used to call 'sophisticated comedy' - and which can only necessarily work when given a light and deft touch. That is a quality which this film lacks.

Colin Firth plays his familiar, straight-faced, shoulder-shrugging character which we are getting to know so well. Alan Rickman, in mood either exaggeratedly histrionic or with buttoned-up menace (the latter always works well from him - most recently, of course, in the Harry Potters) - and Cameron Diaz in full-throttled Texan drawl and cowgirl sass. (I was only waiting for her to slap her thighs - "Yee-HAH!"). Oh, and Stanley Tucci, in three shortish scenes, pulls from off the conveyor belt another of his fey eccentrics.
A simple plot involves forgery of a Monet which Firth, as an act of vengeance, attempts to sell to Rickman at a price the genuine article would have commanded. Add in a sprinkling of swear words which have long since lost the power to shock.....and there you are.
I really didn't expect to find it the bore that I did. It felt longer than it's just-under-90 mins. It's a shame because it did have a lot going for it - a good, starry cast (Tom Courtenay's in there too), easy to understand storyline and a script by the brothers Coen. But for me it failed to work - and ultimately it just didn't engross.

I'm afraid that with a film devoid of LOL moments, just a very few half-smiles cannot rescue 'Gambit' from a .......3/10