Film: 'THANKS FOR SHARING' 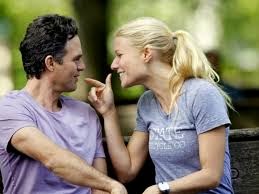 Despite a trio of quite starry actors in three of the main roles (Ruffalo, Paltrow, Robbins) to which one can add Joely Richardson and Pink (Alecia Moore), I found this borderline boring. Ennui set in early on, and at just shy of two hours it was rather too long.
Released last year in America (why do we get so many films so much later?) and classed as a drama/romantic comedy, evidence of the last word seldom shows.
One review on IMDb finds the script "incredible" and "not trite". I disagree, finding it uninspiring throughout.

Ruffalo (sadly for me, with a fur-less face this time) and Robbins meet up in a self-help group of compulsive sexual behaviour addicts. Hence the film's title. It's an unusually large group.
So far so good. Pretty sure I've not found this subject addressed on film before. Ruffalo meets up with Gwyneth at a social function and attraction is immediate. Unsurprisingly, he keeps his addiction from her - until she accidentally finds out about it after the bonking has started, leading to an off-on relationship for the remainder of the film.
Robbins, living with his wife, is visited by his long-since-left adult son and who both try to get over their past mutual hostilities, not entirely successfully.

I was hoping I'd like this film more. I didn't think the Paltrow/Ruffalo relationship looked convincing on screen and though Tim Robbins in particular was good, as he just about always is, it wasn't sufficient to rescue this.
There are also a few glaring lapses of continuity.

Btw: They keep referring to sexual addiction as a 'disease'. Thinking about that word, I'd assumed that a 'disease' was a physical illness, set off at a micro level with a virus, germ, bacterium etc. I could be wrong, or it may be that it's one of those words applied differently in American English and British English.
Also, in a hospital, would one ever really find a female, white-coated doctor, visiting patients wearing six-inch stilettos? I would have thought that they weren't the most practical shoes when she has to make an emergency bee-line, and I should have expected health regulations to demand more functionally appropriate footwear. But again, I'm ready to accept that it may happen.