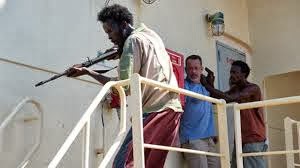 If anyone goes to this hoping for two hours plus of highly charged excitement, I doubt if they'll be demanding a refund. By the time it finished I felt quite drained as director Paul Greengrass turns the screws real tight and keeps them in that position.

A lot of people have already seen this so I won't bother to repeat anything other than it's an essentially simple tale (claiming to be based on true story) of Somali pirates highjacking a container ship off the Kenyan coast for a several million dollar ransom. We are all familiar with the relatively new hazard of piracy in that area and though I'd have heard the news about this one I couldn't recall the details nor how it had ended. I also hadn't realised that this was the first major event of its kind.

Tom Hanks, as the captain, here and so often elsewhere, presents an all-round good guy (with family, of course, though it is based on fact), this admirable quality almost certainly spilling over from the persona he presents in real life which, I dare say, he could well be, and I would certainly like to think he is. However, I do tend to find this a bit of a problem in his films as I can't always get beyond the man who is acting - and he almost always plays a 'goody'. (That's why I thought it was a refreshing change to see him in a negative role in the excellent 'World Atlas' at the start of this year). But for this film he is ideally cast as the conscientious, no-nonsense man in charge.

Brakhad Abdi as the chief pirate is a revelation. Totally convincing, he shows us how terrifying such a figure can be, a man who refuses to recognise that he, along with everyone else, has feet of clay. Incidentally, I found it interesting that neither side at any time invoked the name of God/Allah. If they did I missed it. Or maybe it's a mistake to assume that pirates who also happen to be Islamic (I assume) are all religious zealots.

It's a very loud film. Once the action starts in earnest there's hardly a break from the thumping soundtrack. Also, there's quite a bit of shouting. In fact the entire experience at the cinema I went to approached quite close to aural pain. (I'd forgotten to take my cotton wool ear plugs, which I would have used without doubt.) But I find sound turned up to max is a common feature of many cinemas nowadays, much more than it used to be. It's as though they want to make sure we don't doze off, which is hardly likely in a tense drama like this.

As entertainment this film is very high quality, superior to many other reconstructed real-event dramas I've seen. For that reason it would be unfair if I awarded it anything less than a well-deserved.......................7.5.
Posted by Raybeard at 08:52