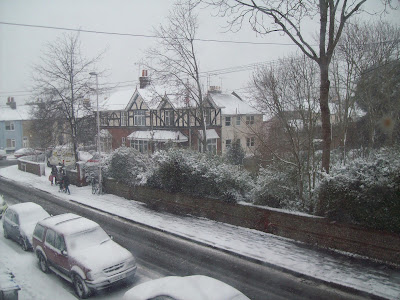 This photo was taken from my window this morning. Maybe not much in terms of what Winter can be like elsewhere but enough to stall my plans for cinema visits until it gets less bone-chilling. Temps today have remained below freezing and are expected to dip to -4 Celsius tonight. There's a possibility of these teeth-chattering conditions ameliorating just a little on Tuesday but there's no significantly milder weather in the offing just yet.
Meantime I'm letting now four furry friends stay indoors and locking them in at night whilst keeping the heating on - necessitating my having to rise every morning around 2-3 a.m. to let them (or coax them) outside in order to fulfil their toilet requirements - and then wait for them to return, one by one, before I can try to get another couple of hours shut-eye.

The following 'choice' films, which I would otherwise have seen, are already in local cinemas or due to arrive soon, and there is considerable doubt if I can catch them all, or even perhaps any of them, as that would mean leaving the pussies alone here for up to 6 hours, with window open and heating turned off. Blackso, in particular, forgets that he can come inside via the back way and so he'll sit out in front on the low garden wall awaiting my return, where he'd be an inviting target for snowballs chucked by kids returning home from school. If I did go out I'd be worrying about him all the time.

These are the films I am missing as at now:-

The third of these is 15 mins short of a whopping 3 hours in length. It's even longer than 'Les Mis', for crying out loud! (Concision has never been one of Tarantino's attributes).
So, if the weather doesn't quickly lighten up and warm up, even more films are going to come and go unseen. Too bad. Can't do anything about it when the pussies have got to come first!