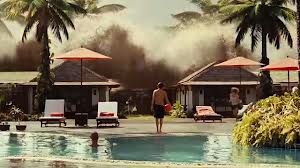 Forewarned that this is a 'weepie', I wasn't all that keen on seeing this film. I do have a tendency to put up a mental barrier to scenes when an insistent orchestra is willing you to open the tear-ducts. And there are a number of those occasions here, though it must be said that the actual event itself is mercifully, and very effectively, free of such aural 'underlining'.

Most people will know by now that, despite this film's Spanish pedigree, the family caught up in and wrenched apart by the Christmas-time tsunami in Thailand of a few years ago, and on which this British family in the film is based, was actually Spanish too.

Acting by the two principal adult characters could hardly be faulted - particularly that of Naomi Watts. Also, the effects are all one could wish for in a 'disaster' film.
Because I'd prepared myself to maintain an emotional distance from the happenings on screen, maybe for that reason I did find the swooping orchestral strings especially jarring. Some watchers may not mind letting themselves be taken up by the high emotion. Not so me. That's always been the case where I find a film using conspicuous (and often unnecessary) effort to involve one in the on-screen drama. It draws attention to itself and thereby, for me, weakens the impact, whereas allowing only the sounds which naturally surround a given scene provides the veracity that a musically sentimental soundtrack takes away.

Of course it's a very simple story which everyone can follow, without it travelling down irrelevant by-ways - and that is one of its merits.
Always fine to look at, never boring or seeming to drag, I was quite impressed notwithstanding my reservations, which are very personal, and which many others may well not share.
When it comes to giving it a rating, this is hardly a film to be marked on 'enjoyment', my most oft-used criterion. It's certainly quite a gruelling watch at times, but a reasonably profound one too.