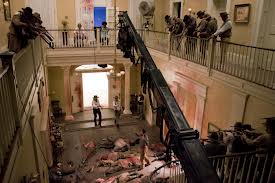 Sprawling, epic length, ultra-violent, mid-19th century tale with 'western' backdrop, concerning black slavery and bounty-hunting. Tarantino is in his element here and succeeds in providing pretty high entertainment value. I was never bored during its 2 hrs 45 mins, though it might have benefited from some judicious cutting - even if that meant having to sacrifice one or two of the graphically bloody shoot-outs.


The four lead characters are all very charismatic in their parts so that one wonders whom to look at when two or more are on-screen simultaneously - and all of them act to perfection. I particularly liked Christoph Walz's foppish German (former dentist) bounty hunter with his flamboyantly circuitous manner of speaking. Jamie Foxx was perfectly cast as the film's focus -  while Samuel L. Jackson (almost unrecognisable to me) convincingly waddles about, emerging from the background every now and then, giving his entire 'slavish' allegiance to Di Caprio's heartless and scary plantation owner.
As with all many of this director's films there is a significant thread of humour running through much of the film which belies the extreme violence - of which there's quite a lot - and lending the horrific scenes a comic-book depiction. (There are also a few brief scenes, mainly towards the start, concerning the treatment of horses which made me wince a bit, but they were quick).

If you're a Tarantino fan I'm sure you'll like this film. He's never been one to short-change his audience - and in this film he delivers what he's renowned for. I enjoyed it enough to give it a.......7/10
Posted by Raybeard at 08:21