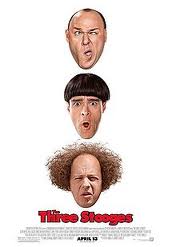 First, a confession. I have never in my life seen anything at all featuring the original trio. I became aware of their name probably in my teens and seen just one or two old photos of them since then. I knew that their humour was slapstick. And that's about it.
I understand that they made short comic films up to the 1950s and for a while they appeared on TV quite a lot, none of which was seen in England.
At the kids' Saturday morning pictures we went to during the mid-late 50s (before we'd got our own TV), the big American names on screen were 'Abbot and Costello', and 'The Bowery Boys' (whatever happened to them?). No Laurel and Hardy even, who were by that time regarded as 'old hat' and out of fashion - their only being deservedly re-appreciated in the 1970s, largely due to the oncoming popularity of video. And there was certainly no 'Three Stooges'.


Anyway, back to this film. I did laugh more than I was expecting to - at least during the first half. But all that head-slapping, hair-pulling, nose-tweaking, eye-poking etc became, over time, repetitive and wearing. Ninety minutes really stretched it to breaking point - though there were still, admittedly, occasional chortles.
The film is pointlessly broken down into three half-hour episodes but as the plot, such as it is, is so thin they could just as well have been run together. I suppose breaking it up does give a semblance of it being more digestible even if wasn't quite so.
The only members of the cast I knew were Sean Hayes (from 'Will & Grace', of course), Jennifer Hudson and Larry David, the latter in particular quite amusing in an unexpected role.
I think it's the kind of film that would go down better sitting in front of the telly with a friend and with a few cans of beer on hand. I can imagine that with a bit of alcoholic assistance it could well be seen as much funnier, even hilarious.

My rating ought to recognise the fact that I did laugh a bit more than expected, and for that reason deserves to be marked a notch above average.