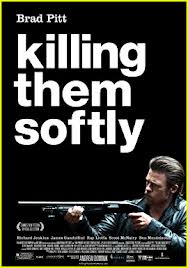 An oddity of a film, this. The story involves robbery, crime syndicates, hired killings, gang solidarity.......you get the picture. Every single character seems devoid of any redeeming qualities, so there's no one with whom to empathise.
It's 'odd' because it's a very 'talky' film. High-density dialogue making it seem longer than its 97 mins.
Two major departures from all the talk - the first an extremely violent and extended beating-up, the second a shooting in balletic ultra slow-motion looking, actually, quite beautiful - set to the strains of Ketty Lester's excellent 'Love Letters' .(At least they didn't choose the far inferior and unimaginative attempt by Elvis, a few years later, to carbon-copy it. In fact all the songs used as soundtrack to this film, set around the time of Obama's inauguration, are anachronistic with ironic effect)
The Brad P. character has, especially at the film's end, some very unflattering things to say about the new President's vision of America. I suppose that Brad the person put that down to 'playing against expectations'.
Much has already been said by critics about the misogynistic dismissal of women as their being no more than sex objects - all of them off-screen apart from the James Gandolfini character's hooker, who is likewise disdainfully dismissed in a scene where she is permitted to utter a few less-than-weighty lines.
I did, however, think the build-up and maintaining of tension through most of the film was successful, with all acting of a high order.

In terms of my own personal experience and enjoyment (if any) I award 'Killing Them Softly' an equivocal........5/10
Posted by Raybeard at 10:03