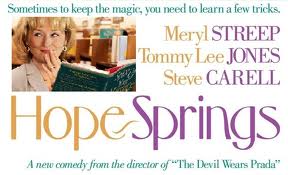 Just as for yesterday's film, I approached this one favourably disposed. But unlike Woody Allen, Meryl Streep has never disappointed me - and I've seen every film of hers which has been granted a cinema release. This one continues the line.
It said in a review I read this morning that her acting was 'mannered'. I disagree. There are certainly moments when full-on high emotion is required, though she is still always credible to me. Outside these occasions her acting is as highly and subtly nuanced as it ever is.

Very much a three-person film, which would work admirably as a stage play, this is what we used to dismiss, pejoratively, as a "lady's film", meaning that there are no big-set action sequences and that the story is, essentially, grounded on a story of the 'love emotion'. There's lots of conversation, and the entire 'plot-line' has a trajectory where one can predict the destination, though not without a number of delights and laughs on the way.
Streep and Tommy Lee Jones, are in a congealedly-cold 31-year marriage which she wants to re-ignite with a spark through the services of marriage counsellor Steve Carell. And such is the entire denouement.
Both Jones and Carell are first-rate - the former, playing an unwillingly dragged-along sour-puss, I don't think I've ever seen in any domestic situation film before.
My only real carp is that there are a few shocking lapses of continuity, though I have seen a lot worse. I think it's one of the negatives of seeing a lot of films. One becomes more observant of such errors, wondering why none of the team took the trouble to notice it and have the scene re-shot - or was that just too much trouble? Or were they hoping that no one would pick up on it? However within the totality of things it's not worth dwelling on.