New Film - 'TO ROME WITH LOVE' 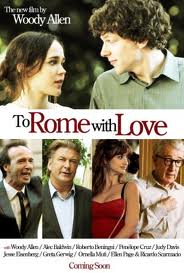 For over 40 years the release of any new Woody Allen film has been an event for me, despite his 'hits' in recent years being outnumbered by those which many regard as failures, although even several of the latter I've liked. Because of a few reviews which I'd heard and read, had high hopes for this. Sorry to say I don't think it reaches my required standard. A shame since this is his first film for quite a few years in which he himself actually appears.

The film consists of a quartet of stories (one of which itself splits into two), running concurrently, each going its own independent way, only joined together by being set in Roma. (Cue the usual touristy, but still ravishing, views.).
Funniest by far is the one in which Allen stars (with the wonderful Judy Davis) though even this strand is of diminishing returns, failing later to deliver the fabulous one-liners with which it begins so promisingly.
The second most interesting one is marred by the presence of Alec Baldwin who, after a promising opening appearance, develops into a muse-like figure, generously ladling out advice concerning romance and life to a new young male acquaintance who is hovering between keeping the affections of his current girl-friend and directing his attentions towards a new one with the arrival of his partner's friend (Ellen Page in fine, entertaining form here as the self-fixated Monica). It would have been better if the Baldwin character had just stopped interrupting an already interesting situation with his bon-mots and saws, which made me progressively more exasperated. (Allen again betrays his weakness for name-dropping high-cultural references - Kierkegaard, Rilke, Bartok, Strindberg, Yeats....... you know, the sort of names which pepper all our workaday conversations!)
The other two stories are much slighter - the one with Roberto Benigni essentially being a one-joke vignette which long outstays its welcome - and the final bi-furcated strand just left me baffled so that I wanted to re-wind to see again how each thread had started from the situation it was now in. With Penelope Cruz dazzling as a high-class prostitute there were some good moments, but not too many.

I do think the film would have been vastly improved by dropping the Benigni story completely, as well as Alec Baldwin's wise man act. It would have been a much sharper and, probably, funnier film. As it is the film's length is already 15 mins longer than Allen's usual crisp 90 minutes.
An even better idea might have been to have made a half-hour tale of just the Woody Allen episode - but, of course, there'd be no cinema market for that, even though it would undoubtedly have been more effective.

I tend to go into an Allen film with an at-the-ready smile on my face which, more often than not, delivers at least part of the promise. This does too, but not quite as much as I'd been hoping for.
If I was to be offered a gift of a boxed set of 20 Woody Allen films of my own choice (out of a current 45 to date, I believe), sorry to say that, despite some cracking lines, especially towards the beginning, this film would almost certainly not be on that list.