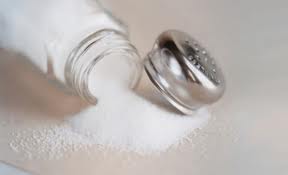 This morning I attended the second of two half-day workshops providing information for people like me who've been recently diagnosed as Type 2 diabetic.
Around 16-17 attending with none younger than, I'd guess, around 50 - and all very cheerful, with many laughs throughout, which I suppose is a reaction against thinking about a condition which, if neglected to control, has the potential to develop into something really serious.
I don't think there's a great chance of that happening with me as I've already altered my lifestyle in certain positive ways and will now take further steps.

Talk got round to related conditions and their knock-on dangers, one of which is high blood pressure which I also have, and several of those attending also suffer from. Relating to this there was long discussion about food and diet - and what one should avoid.
One thing I've always done is, although giving up sugar about 30 years ago, as well as refraining from putting salt on my food once it's on the plate (but with the single exception of fried potatoes), when I boil vegetables I've always added salt to the water - quite a lot of it, in fact. I was brought up to believe that adding salt at this stage helps to bring out the flavour of the vegetable. Now I learn from at least two members of the group that not adding salt to the water actually enhances the flavour. Furthermore, both the nurses who were running the class say that they gave up salt entirely years ago and one of them says that it now tastes foul to her. Seems that, like doing without sugar, it's a matter of acclimatising oneself to it. When I first gave up taking sugar in tea and coffee it took perhaps a fortnight of the beverage tasting odd and insipid until my tongue adjusted to it. But after that was over, and since then, I've never had a yearning for sugar again. So I imagine the same thing will happen if I give up adding salt when preparing veg. (As everyone knows, there's usually more than enough of both salt and sugar already in the ingredients of bought foodstuffs anyway to fulfil the body's needs. It's even excessive to an unhealthy extent in many cases).
I do tend to find it easier than some people do to alter life habits so I don't expect any relapses in this direction either.

So from now, even on chips (fried potatoes), salt is henceforward O-U-T!
.
Posted by Raybeard at 07:39