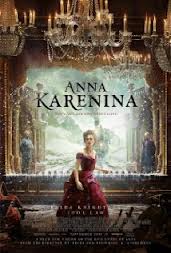 (Better get this posting done quickly as, if I manage to see all the films I want to see in the next few days, then a log-jam on postings could arise. I saw this film on Monday afternoon, then blissfully unaware that when I got back home I was to be engulfed by computer troubles yet again.)

Straight to the point - I found this a splendid, bewitching film.
True, it doesn't have the visually epic scale of, say, David Lean's 'Doctor Zhivago', but the conceit of framing it in a live theatre (with occasional, very effective, 'openings-out') worked magically for me. Comparisons have been made with Baz Luhrmanns 'Moulin Rouge', (another film I loved) and I think they are justified to some extent, though that in no way detracts from this particular interpretation of a singularly weighty novel.
Some who know the original work might be put out by the whimsical manner in which the film opens. (The book is virtually devoid of any humour at all in its relentlessly serious 800+ pages!) But this is an interpretation - not a translation, and, even as an unashamed worshipper of the book, I found this angular perspective wasn't so misplaced as to jar.

Turning to the cast, I've read and heard that some reviews said that Keira Knightly misses the title character by a mile, and another which said that she got it exactly right. I concur with the latter view. She nails the flighty, adventurous yet guilt-ridden adulterous wife just as I see Anna.
Jude Law could not be improved on as the cuckolded husband. I don't think he's done better work on film. Here he gets to the essence of the character, with whom we can sympathise as the God-fearing, injured party, yet he also manages to bring a priggishness to his role that is spot-on with how Tolstoy sees him,  resentfully smouldering to perfection. A marvellous portrayal!
Aaron Taylor-Johson (whose recent roles included the part of John Lennon in 'Nowhere Boy') plays Anna's lover, Vronsky, to my mind the least interesting of the book's half dozen or so main characters. Despite his dandyish portrayal I  found the character on film also quite uninteresting, and one can only wonder what Anna saw in him to risk so much. But that too accords with my reading of Tolstoy's original.

Of course, a film of a mere two-hours must sacrifice the sweep of the book, but I think the heart and spirit of it has been admirably caught here.
Top marks go to screenplay-writer Tom Stoppard who accepts the challenge of condensing down this hefty tome, and he rises to the occasion with relish - and pulls it off with honours!
It would be invidious to neglect mentioning another source of my joy in this film, viz the music score of Dario Marianelli. Much above the plane of what we are so often served as background to historical dramas, it sounded very good and authentic without being over-distracting.
All this is not to say that the film is without faults. I think, for instance, director Joe Wright slightly over-plays the frequency of his requirement of background characters to 'freeze' their actions in statuesque poses, though it's not a major point of criticism.

Not everybody will like this film. Some may well detest it, especially those who have a reverence for its source material. But I'm among those who have the novel as one of their very favourite books of all time, and I found this project worked well-nigh perfectly in purely cinematic terms.
On the IMDb site, where 1/2 points are not permitted, I've given it a '9' - rare indeed for me.
If I score it half a point lower here that doesn't reflect any dissatisfaction at all - only that I allow myself the luxury of half-points - and out of the nearly 4.500 films I've seen to date, only a very tiny handful have scored that elusive, full 9 (and none have ever earned even a 9.5, let alone a perfect 10).