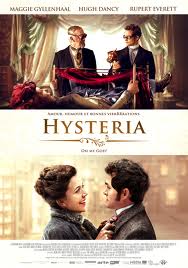 I loved this film!

Let's get a couple of things out of the way first.
It was actually completed in 2011 and is only now being given limited release in selected cinemas. Pity, because for me it was a tonic, and really deserves to have had a wider distribution.
.....and, yes, it features Rupert Everett - not exactly flavour of the month in the light of his recent comments opposing equal marriage. For that reason his fairly significant role here had, for me, a jarring effect which, I hope, will fade in time. (But only if he retracts and apologises).

But back to the film.
London - late 19th century. A doctor (the ever-admirable Jonathan Pryce, who always raises the standard of anything he appears in, be it on stage or on screen) runs a practice which helps its wealthy and mature lady clients (all middle-aged or more) to overcome and release their peculiarly female(!) condition of 'hysteria' due, so the theory goes, to the insufficient and too infrequent stimulation of the uterine tract. He personally employs his own manual method until, because of its popularity and with his services so much in demand, he takes on a young doctor as assistant.
With the help of his friend (Everett), the young doctor (Hugh Dancy - a bit of a hottie!) accidentally hits on the idea of turning the former's invention of an electrically-powered feather duster into (shhhhh! whisper it!) -  a VIBRATOR! The effect on the ladies is.....well, dramatic!
The undoubted star of the film is Maggie Gyllenhall (who provides, later on, a romantic interest) as a teacher of working-class children who is also the wilful, energetic, feminist daughter of  the elder doctor. Her English accent is remarkable - upper class without being distractingly cut-glass. She holds her own with honours among a fine cast of stalwart British actors and actresses.
The whole film is handsomely shot - and with a noticeably superior screenplay, to which I principally mean the vocabulary employed. It was a pleasure to listen to.

The film reminded me quite a bit of the 1994 Anthony Hopkins/Matthew Broderick film 'The Road to Wellville', also under-rated, I thought. (Broderick, in that, looking never hotter, before or since, with his whiskers!)

'Hysteria' encapsulates a lot of the attitudes towards women in the Victorian era (and later - even present-day), summarised neatly in a big speech by Dancy in a courtroom scene towards the end. But there were also more than a few LOL moments.
Here's just one:-
The Jonathan Pryce character is berating his young assistant about complaints he's been getting from the ladies about the latter's digital technique falling below the expected standard (due to over-use). Before actually giving him the push, he sternly admonishes him with the information.......