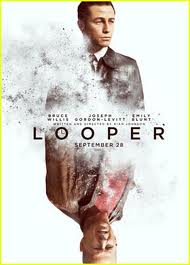 (This has been round for a couple of weeks or more but I was waiting for a cheap showing to come along which, yesterday, it did.)

The consensus among the critics I read was that one shouldn't question the scenario about this story's basic concept (travelling back in time in order to change the past and hence to alter the future), but just to go open-minded and prepare to be entertained.  So that was the frame of mind I took along.

Well, first of all, the initial half of this tale is taken up with setting the scene (yes, I get it - now move along, please!) and for me it only seems to acquire purpose and direction after nearly an hour when Emily Blunt appears - steely, sassy and with gun in hand - more than a match for any man! (Watch out, fellas, 'cos if you go on upsetting her she's gonna blast your balls off!)
Well, you know that when said Blunt has a fiery and envenomed first encounter with Joseph Gordon-Levitt, it won't be long before they're in bed together, bonking merrily away to appropriately smoochy musical strains, and leaving me cringeing in my seat. But that was only one of the two major irritations which came about simultaneously. The other one being that there's also a young kid (let's just call him her 'son' for practical purposes) - and there are few things that rile me more on the cinema screen than a child talking with a wisdom and maturity way beyond his or her years. (It could be argued that in this case there was justification for this, but it still makes me wince.)
Then things get even weirder with telekinesis thrown into the already curious mix. Bruce Willis gets the film's star billing but he doesn't really have all that much to do - both in terms of screen time and acting, either enigmatically subdued or explosively angry, as he stalks his younger self (in the J.G-L in character) and goes little boy-hunting.
I gave up on this film long before the end - and was looking at my watch more than I usually do, seriously considering walking out before it was over, but I did stay up to the final credits.
It's a film that's doing well in the U.K. so I accept that it's probably yet another that reveals me as being well outside the range of its target audience. But I can only talk of my own personal reaction -