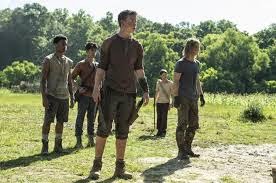 The premise of this film shares much the same territory as 'The Hunger Games' trilogy. In this case I don't have much enthusiasm for catching the further two projected episodes, though for the 'Hunger' series I did see them all..

Set in some vague future, a selected group of racially-diverse youngsters (here, all teenage boys/young men, some of whom look barely out of school) find themselves mysteriously appearing one by one at monthly intervals in an enclosed pasture and woodland enclosed by a massive circular maze whose walls change position daily and which appears to be the only means of escape. If anyone finds themselves trapped in the maze he is left to the mercy of large, semi-mechanical(?), spider-like creatures with voracious appetites. Then one day a young woman is delivered by the usual means, an elevator from below ground. Like all the others, she  doesn't remember why and how she arrived.
The reason for their being held captive in this way is only explained as the film reaches its conclusion. Meanwhile, with no idea as to what they are supposed to do they survive by living off the land in primitive fashion (shades of 'Lord of the Flies'?).

Director Wes Ball manages the action sequences fairly enough with some reasonably impressive CGI work, though throughout the film the dialogue doesn't rise to any inspiring level to reflect the desperate situation of the 'prisoners' as they try to discover an escape route.

It's a noisy film and it's largely derivative, plot-wise. Will Poulter plays the most interesting character, the one who doubts the sincerity of the latest arrival (Dylan O'Brien) who seems most intent on getting to the bottom of what's going on. Poulter suspects that he must be part of the overall plan to test them somehow, whatever that plan is.
I found it quite easy to identify which ones in this group would not survive into the next episode, having enough leisure-time to guess - and I was correct.