Film: 'Maps to the Stars' 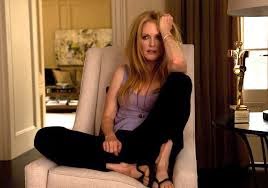 This is an oddity - too weird and insufficiently endearing to be considered as quirky. But that's David Cronenburg's films for you - mentally challenging, rarely dull, but when it's over I find myself asking "What was that all about?"

Set in Hollywood (cue celebrity name-dropping - hence the film's title - and a brief cameo appearance from one of the younger big names of today), John Cusack plays some kind of New Age guru who writes on self-improvement, and is the father of an obnoxious, wise-ass, spoilt brat of a boy actor who, despite being all of 13, appears to be totally clued up on drugs and sex. His once-institutionalised (for starting a life-threatening fire) and estranged older sister (Mia Wasikowska) travels from Florida to re-connect with her family who are far from happy to see her.  Mother (Olivia Williams) plays a bundle of nerves - but overshadowing them all is Julianne Moore as a client of Cusack, a seriously dotty woman intent on making a film of her deceased mother, whose role she wants to play herself. Both she and little brat actor keep having disturbing visions of departed ones

As she always does, Julianne Moore gives the film dramatic weight. Without her it would have been a much slighter affair. However, as it turns out the film isn't one I'll remember for long, because apart from the latter's episodes of crazy behaviour and intensive emoting (which are, admittedly, a good watch) there's little to latch onto and really no one on whom to pin ones sympathies.
The film is well shot though with nothing much to retain in the mind.

There is at least one extremely brutal and gory scene, plus a couple more which some may flinch at.