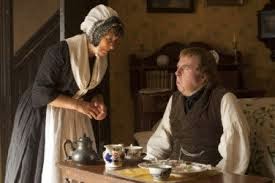 I always look forward to a new Mike Leigh film. Very few  have disappointed, and this one not only met my expectations, it far exceeded them. It's a marvellous film.

Portraying the last couple of decades or so of the life of world-renowned English artist Joseph Mallord William Turner, Timothy Spall grunts, growls and harumphs his way through the role more convincingly than many another actor could have achieved. Despite the film's near-epic length of two and a half hours, it doesn't outstay its welcome at all. It's a major achievement, easily one of Leigh's very best, which has already collected several awards and deserves to be garlanded with more than a few more come BAFTA and Oscar season.

Although my aesthetic appreciation of the visual arts isn't as pronounced as it is for music and literature, Turner is one of the very few I was attracted to from the very moment I first became aware of him in my teens. I realise that there are some who have a problem with his works. Happily, not so with me. But I don't think you have to be an admirer of his to like this multi-faceted film, containing hints of comedy, sadness, relationship and family drama, as well as capturing his working method in convincing fashion, and the range of reactions his paintings provoked.

Acting is faultless throughout. Although Spall is immediately physically recognisable in whatever part he plays, such is his bodily frame, here he has never been better. I don't know how close he came to the real artist. In fact I'll readily admit that I knew next to nothing about Turner's life, and was only vaguely aware of his dates (1775 -1851). I might have guessed that he'd been 20-30 years earlier. But this didn't matter. This film makes him into a solid and believable figure.
Once or twice I thought there was a physical shade of a Quasimodo in him (more Charles Laughton than Lon Chaney) but it didn't detract from my enjoyment.

In the acting honours mention must be made of Paul Jesson as Turner's father who, unlike some in society, recognises his son's talent
Also, Dorothy Atkinson as his morose and obedient housekeeper whom he uses now and again for sexual relief. (He actually has a stroppy former mistress and daughter from whom he's become estranged) But most of all I'd commend Marion Bailey (in picture above) as the owner of his regularly-visited guest house in Margate, who becomes something more than just that to him. When she was on screen, I was thinking "We've all known someone like that." - pleasant, attractively self-deprecating with a knowing sense of humour.

We see his paintings on display at the Royal Academy among that of other contemporary artists (some serious historical name-dropping here, though it doesn't jar) - and the varied attitudes to them, often contemptuous.

Photography all through is exceptionally fine - and the script is superior and non-predictable.

I must also mention that there's a short but stunning sequence of the actual scene on which he based his most celebrated painting, 'The Fighting Temeraire'. Okay, it will have been helped a lot, or even entirely(?), by camera-computer techniques, but it's still ethereally beautiful. My jaw dropped on seeing it.