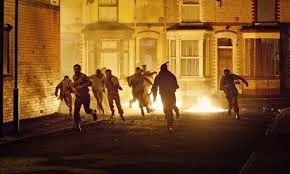 Very tense, very brutal thriller set at the height of the Northern Ireland troubles, the title referring to the year of this story.

Paris-born, London-raised director, Yann Demange, creates a highly impressive, nail-chewing drama in which, once the situational scenario has been set, never lets up on the suspense for an instant.

An English rookie soldier in the British army is sent to Belfast where, as  part of a unit trying to flush out IRA-supporting Republicans, he gets caught up in a local riot and, through a lapse on checking by his commanding officer before a hurried withdrawal, he finds himself left alone in a predominantly Catholic, and hence vehemently anti-British, area where he has no alternative but to try to survive by wits and subterfuge. This is a part of Belfast where everyone has to be on one of two sides. Violent hostility between the two communities rules, as well as full-on hostility against the British army from the Catholic side (of all ages), with swift 'justice' meted out where it's seen to be 'required'. Prevaricators are not tolerated, neither by Catholics nor Protestants. This film dwells mainly on the republicans' anti-British army stance.
The tension is immediately palpable after the initial scene-setting, when the terrified lone soldier (Jack O'Connelll - totally believable in the role) tries to find his way back to barracks without drawing attention to himself. There are several very violent scenes, including at least one extended and especially grisly section where I had to look away.

The angle the film is aimed for is that the audience be willing the young soldier to survive, he being a reluctant pawn in the horrific situation he's found himself, not through his own fault. But even so, there are no 'goodies' and baddies' in this world. To cloud the issue even further, can we be absolutely sure of the loyalties of people claiming a particular allegiance?

I jumped in my seat once or twice at unexpected sudden events. It's all very skilfully managed, though with a bit of background music, which wasn't too obtrusive. There was also the obligatory, torrential downpour at one point, though in this case it did effectively underline the nervous tension.

Another thing in the film's favour is that it's a comfortable, mere 100 minutes long (always music to my ears).