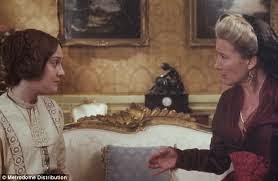 Supporting parts are played by a veritable roll-call of readily recognisable British actors, some with little more than a very few words to say, but the meatiest of these lesser roles are for David Suchet and Julie Walters (here playing aristocratic, against her usual type of part) as Ruskin's parents. Others include James Fox, Robbie Coltrane, Linda Bassett and Derek Jacobi - as well as Emma Thompson who wrote the screenplay. (There are also a couple of brief appearances of living legend, Claudia Cardinale).

The reason for the marriage's lack of relationship is not spelt out explicitly. We see Ruskin's rejection of his wife on their wedding night but not shown exactly why it happens, only from then on he treats her with disdain, put-downs and carelessness of feeling. Delicacy prevents me from enlarging on what's believed to have been the actual historical cause of why he should suddenly have felt this way, but rumours exist to this day which, for reasons of discretion, shall not be elaborated on here.

Richard Laxton directs this film. (He also directed 2009's 'An Englishman in New York - the latter years of Quentin Crisp, with John Hurt reprising the role).

'Effie Gray' is a stately-moving story - not boring, but also not one that gripped me very keenly. It's very well photographed indeed and all impressively acted. If you like period dramas I doubt that this will disappoint you. An agreeable way to occupy a couple of hours ...............6/10.