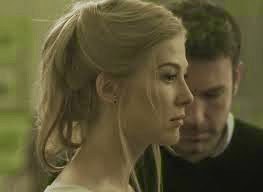 When I see that a film is going to be two hours long I groan. When it's two and a half hours it had better be good! Reviews have largely said that this film is so - and I can now confirm that in my opinion, it's far better than just 'good', it's mightily impressive.

A thriller that wrong-foots the audience time and time again, helped enormously by the fact that Gillian Flynn, the writer of the popular novel (not read by me, yet) has also written the screenplay. The story reminded me of the first time I read John Fowles' 'The Magus', when I could never be certain that by turning the next page all that had gone before wouldn't be demolished for the umpteenth time, leaving the reader having to make a corresponding mental adjustment.

Gillian Flynn has produced a superior script that crackles along and left me breathless trying to anticipate what comes next. Director David Fincher has the two spotlit main parts played excellently by Ben Affleck and Rosamund Pike. I can't imagine either roles could have been done better. (I ought to report that I couldn't quite catch some of the early exchanges, the same fault which ruined Fincher's recent success for me, the entire film of 'The Social Network'. But any dialogue I missed here was nowhere near as extensive as in that film, and there wasn't anything I felt which I ought to have heard but didn't).

As for a precis of what happens, I can only say that Affleck returns to his Missouri home one day to find that his wife of five years (Pike) is missing, there being signs of a struggle. He then calls in the police - and the roller-coaster ride begins. Assumptions one has made of the situation start being subverted only for the then revised situation to be similarly dismantled, and so it continues till one never knows where one's sympathies are or should be. Twists and turns come thick and fast and by the time the end had been reached I felt giddy without having a solid, reliable base on which to stand.

Mention must be made of Kim Dickens as the chief detective assigned to solving the disappearance, with Patrick Fugit as her police officer 'sidekick. They make a fine 'double-act'. In fact, throughout the film I found that humour is not far below the surface, occasionally popping up right up into view. It works well.
Another most interesting feature is the gullibility of the general public tuning into TV News and chat-show programmes, shifting their allegiances according to the 'requirements' of the TV producers. (If I may be allowed another reminder of a parallel situation, I thought of  'Julius Caesar' and Mark Antony's funeral oration, where the crowd's sympathies are played like a musical instrument).

If you like films that require one's attention throughout (which this holds without any difficulty at all, it so pulls you in) and you enjoy a mental fun-ride, this will suit you down to the ground. A major achievement in all respects, I find very little to criticise about it..............................8