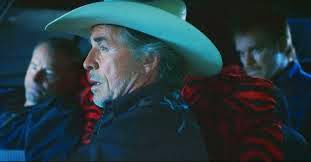 While watching this I was thinking what a good film it was, a thriller with real punch! Coming home while reflecting, and now the morning after, I'm a little bit more ambivalent (reasons upcoming) but it's still darned fine.

First of all, high marks for the storyline which veers off into unexpected by-ways, such that it's difficult to say a lot without giving too much away. Then there's the quality acting by all the main players, each being well-differentiated and played with real conviction and credibility.

It begins simply enough, though troubling, when an intruder is heard in the house of Michael C. Hall and his wife  - (plus infant son, wouldn't you guess!) His fumbling to load his gun and his nervousness in confronting the burglar reveal his practical inexperience with firearms. All that can safely be said is that much of what follows hinges on the true identity of the imposter, the attitude of the small town where it occurs, and the family being menaced because of it. This is only the start of a twisty road.

For much of the first hour of this Jim Mickle-directed film I was on the edge of my seat. The tension worked up from the outset is held exceedingly well, only slightly relaxing after this point, but  then gripping again as the conclusion approaches.
It's set in 1989, and we are given evidence of the period in large mobile phones and the presence of videos, on which we see one especially appalling violent incident (only just cut away a split-second before it happens) which, I feel, has almost scarred my mind.
The style of the film reminded me a lot of the 'glory days' of Sam Peckinpah - bullet-riddled, blood-drenched, and with the occasional obligatory slow-motion shots of violence. At the time (1960s and 70s) he was the only major director doing it and was accordingly criticised for giving physical violence a veneer of beauty, a quality which (they claimed), it doesn't intrinsically possess (which itself is debatable). Then everyone started emulating Peckinpah and blood and guts has become standard fare for a number of today's directors, Scorsese (at least in his films of old) and Tarantino being most prominent. However, in this film the excesses do seem to hark back particularly to those past days of no-holds barred, show-it-all-on-screen, blood-fests.

Sam Shepherd and Don Johnson do sterling service, the former as a most unappealing and scarily volatile ex-con, the latter as Texan lawman and pig-farmer, complete with gaudily embroidered shirts and high boots -  so red-neck, so camp!. Also notable is Michael C. Hall's shakiness with guns at the start transforming into assuredness as the film progresses.

I could have done without two too-appropriately timed thunderstorms to underline the action. Such uses have long since become so hackneyed, indeed ever since the invention of film sound, that I find them every bit as distracting as over-emphatic soundtrack music, of which there is also quite a bit here.

I ought to mention that I heard one reviewer say that the American (pro-gun) NRA would give this film their seal of approval. I think that's far too simplistic an interpretation. If anything, I think at heart it depicts, in a most direct way, the destructive mayhem that easy access to firearms can bring.

Despite my reservations, I'd argue that this is a good, unusual film. My immediate feeling of satisfaction when it was over of having got my entertainment's worth led me to think that I'd be awarding it a lofty 7.5, but pondering afterwards on the feeling that it had all been a tad over-manipulative I feel bound to mark it down a notch or two. It's another one that requires warning for those of a sensitive nature, but if you feel you won't be put off by its graphic, visceral thrills I would urge you to go see......................6.5.