Heart-stopping moments I have to put up with. (First pic - he's only sleeping!) 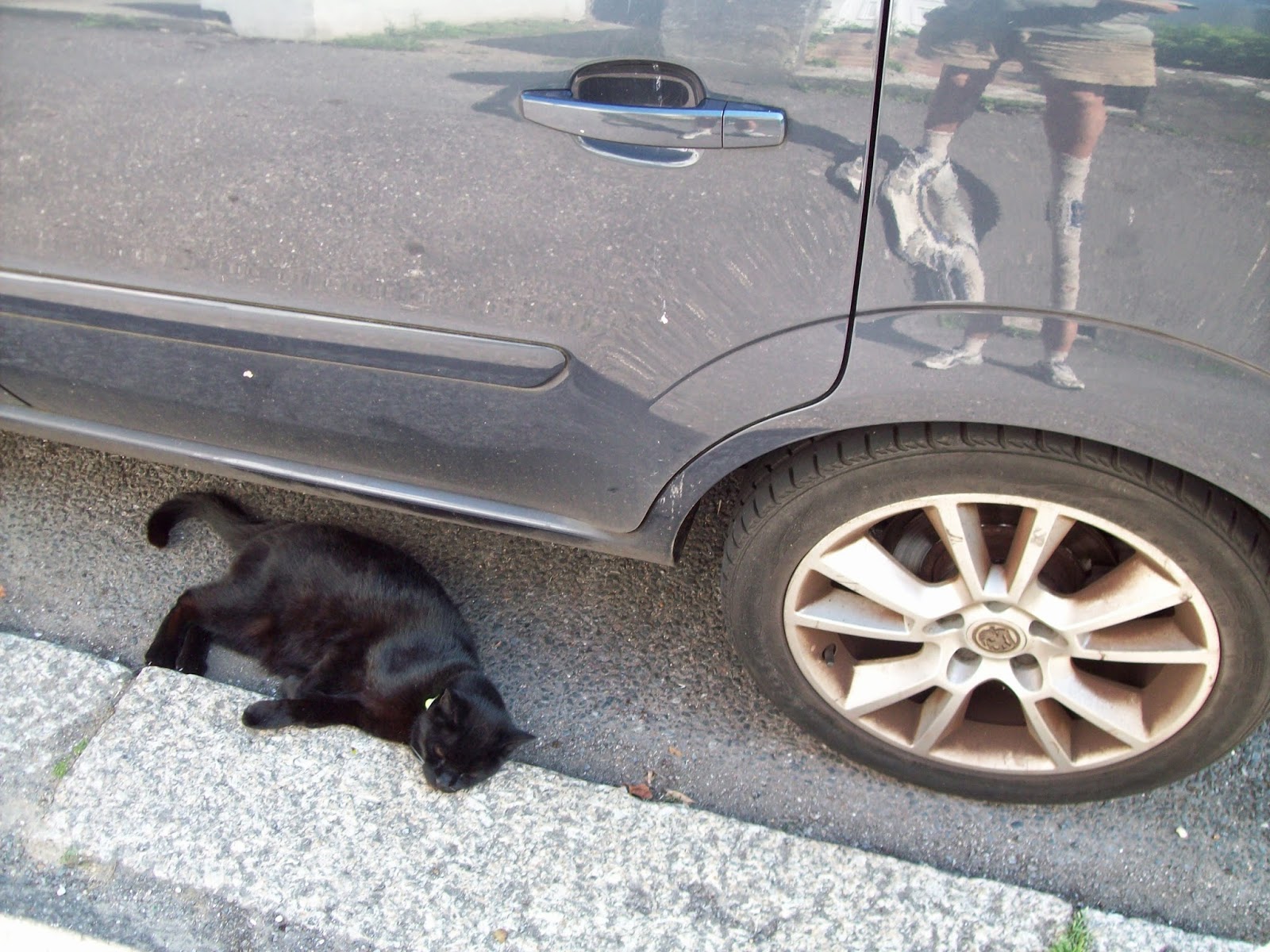 And both these occasions happened just over the last couple of hours. He only does this in Summer when it's hot. Please don't think that the returning driver would automatically notice Blackso before driving off; we have right-hand drive here! And notice, below, his tail already edging under the wheel. 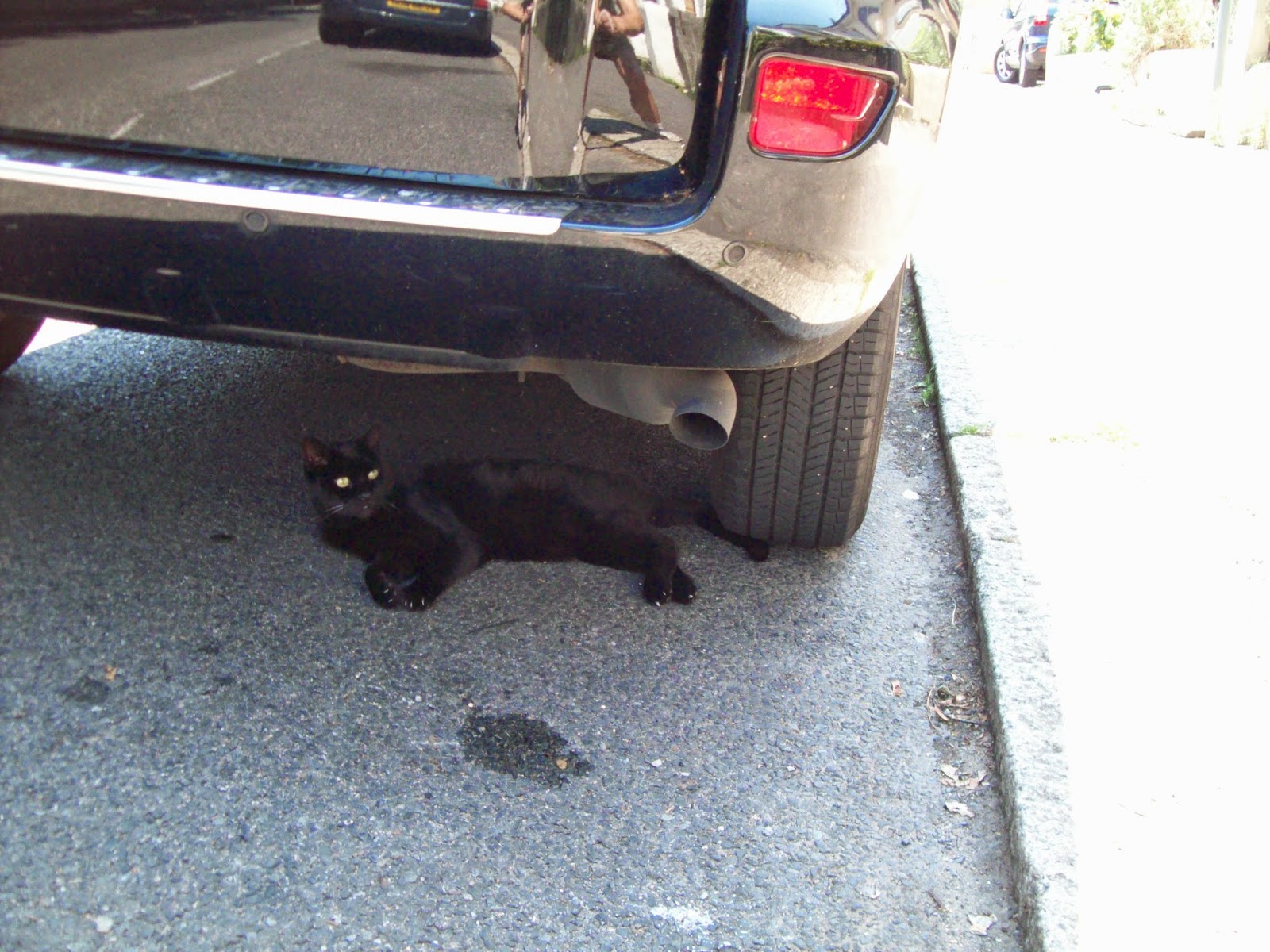 These times he wasn't too hard to spot from my window but sometimes he goes right under the car, so when I know he's outside somewhere, every so often I have to go and check under nearby cars, me on all fours on the pavement, khaki-shorted arse in air, gawped at by passing pedestrians, looking for all the world like I'm looking for or planting a bomb, or I'm on heat, waiting to be mounted. (No takers so far - sigh!)
When he's too far to reach and pull out my coaxing tends to be ineffectual, at least at first. All I get is a look that says "Oh, leave me alone" or "Go to hell!". But I can't leave him there in peril so persistence is required.

Unlike Noodles, Blackso took over my life from the moment he moved in. I had wanted to go and see much-praised, new film 'Boyhood' today, but it's only showing (today, final day) at the least easily accessible of all my regular cinema venues and would have meant my being away for around seven hours (the film alone is nearly three hours long). Yesterday's 'Apes' film, showing at my closest cinema, took me just three hours away, and even then my thoughts kept coming round to wondering where Blackso would be on my return. If anything had happened to him I'd never have been able to live it down. So, no 'Boyhood' then, thanks to this little scamp.

On the subject of felines, here are a few recent pics of:- 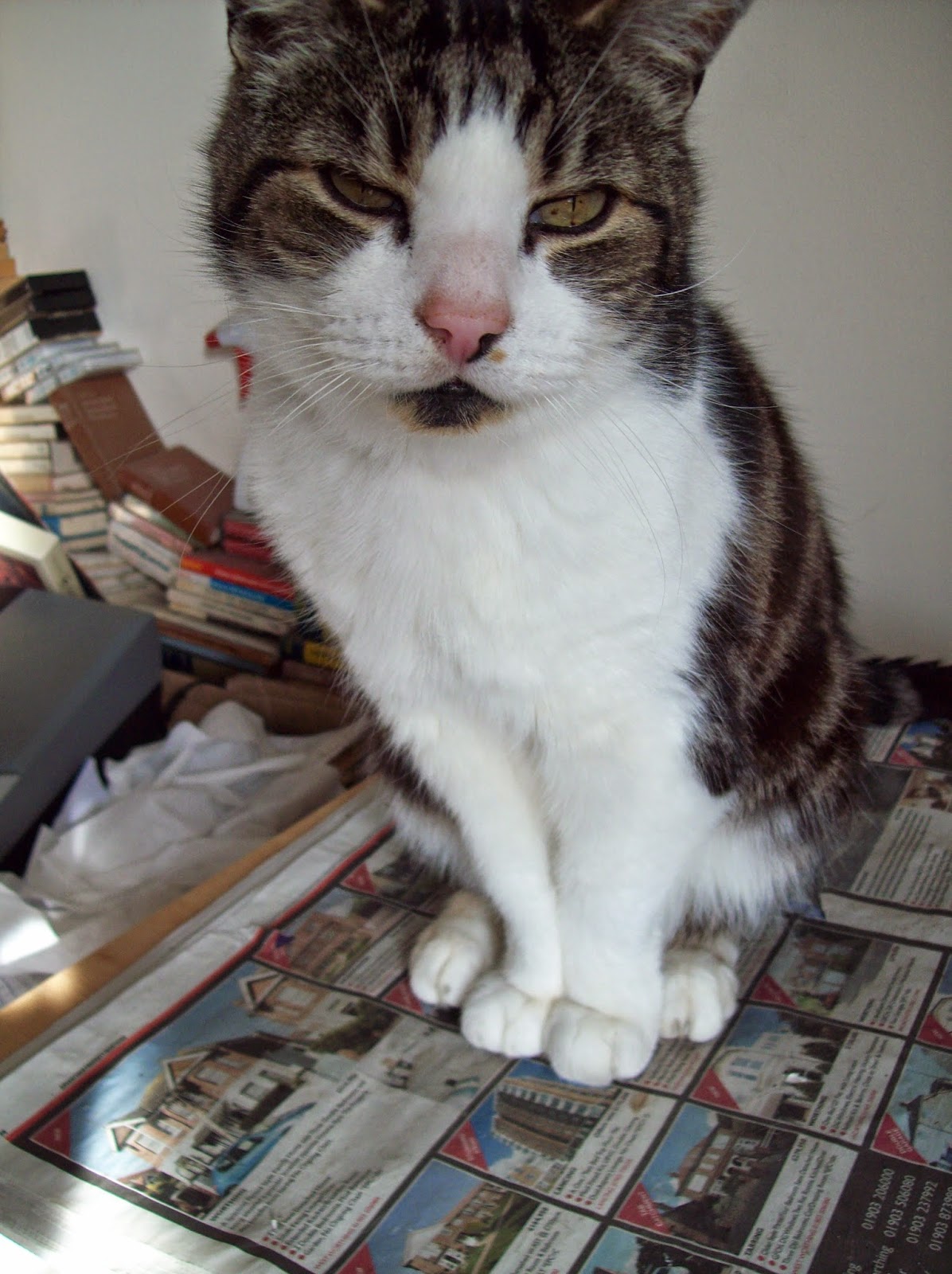 Looking like butter wouldn't melt in his mouth, Noodles came in yesterday not with butter but with a bird in his mouth! Eek! He doesn't do it often but even once is once too many. Thankfully, the poor victim looked dead. I shooed Noodles out of the window with his 'gift', and he remained on the window sill, apparently eating up the entire little body, feathers, legs, beak the lot! At least I saw him eating and next time I looked he was sitting there, licking his lips and paw and washing his face, not a remnant scrap in sight. Yum yum, indeed! Naughty, naughty boy! 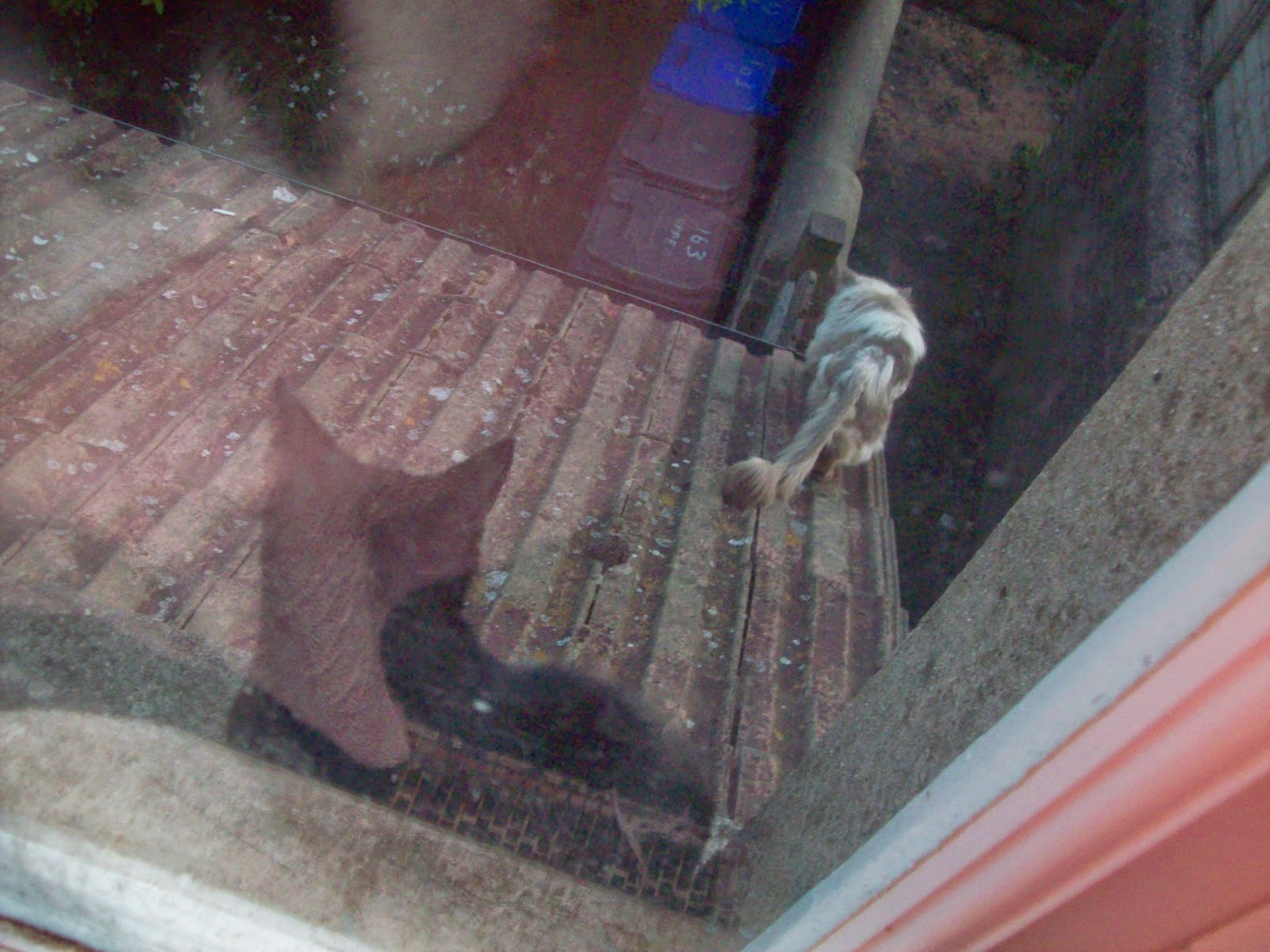 Some time ago I mentioned that my newest regular visitor was a long-haired shaggy with a Persian-type face of which someone had tried to cut his beautiful coat - very inexpertly.  This is him retreating in his pitiable state. Thank heavens that his coat has grown back again in all its luxury, and he really is a beauty, though all the other cats are puzzled or even hostile at him, because he doesn't look like your 'normal' cat. I only hope he doesn't have to undergo another daft person treating him as though trimming a hedge amateurly. He's  nervous towards me (though now starting to trust) but will face up to any other cat, wailing loudly like a banshee whilst challenging them. 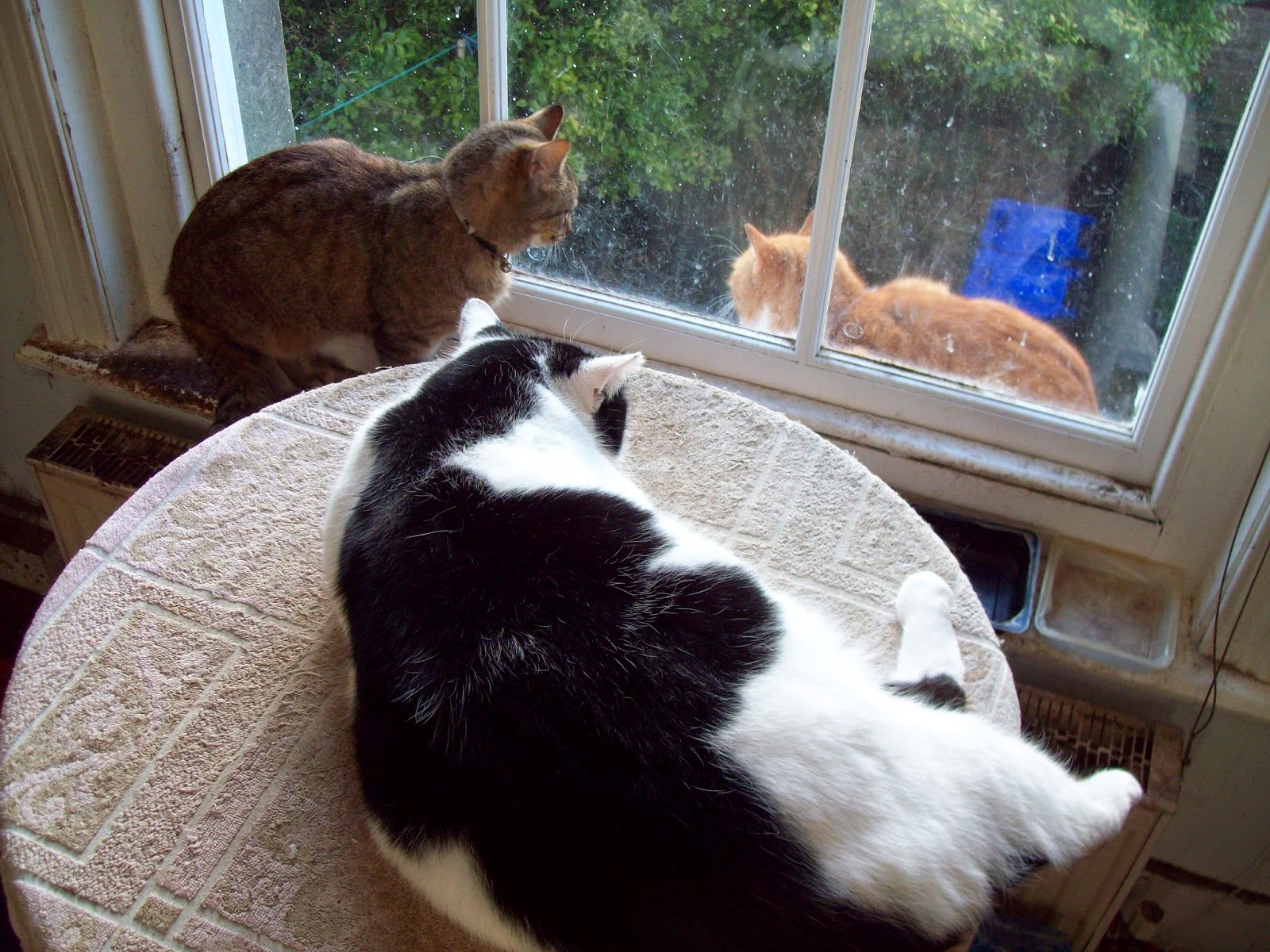 Above, inside, are two of my current visitors - little Tortie and fatty Patchy, both from nearby houses - but outside is the dear late little Ginger whom I found run over in April. A shock which has left a scar in me. 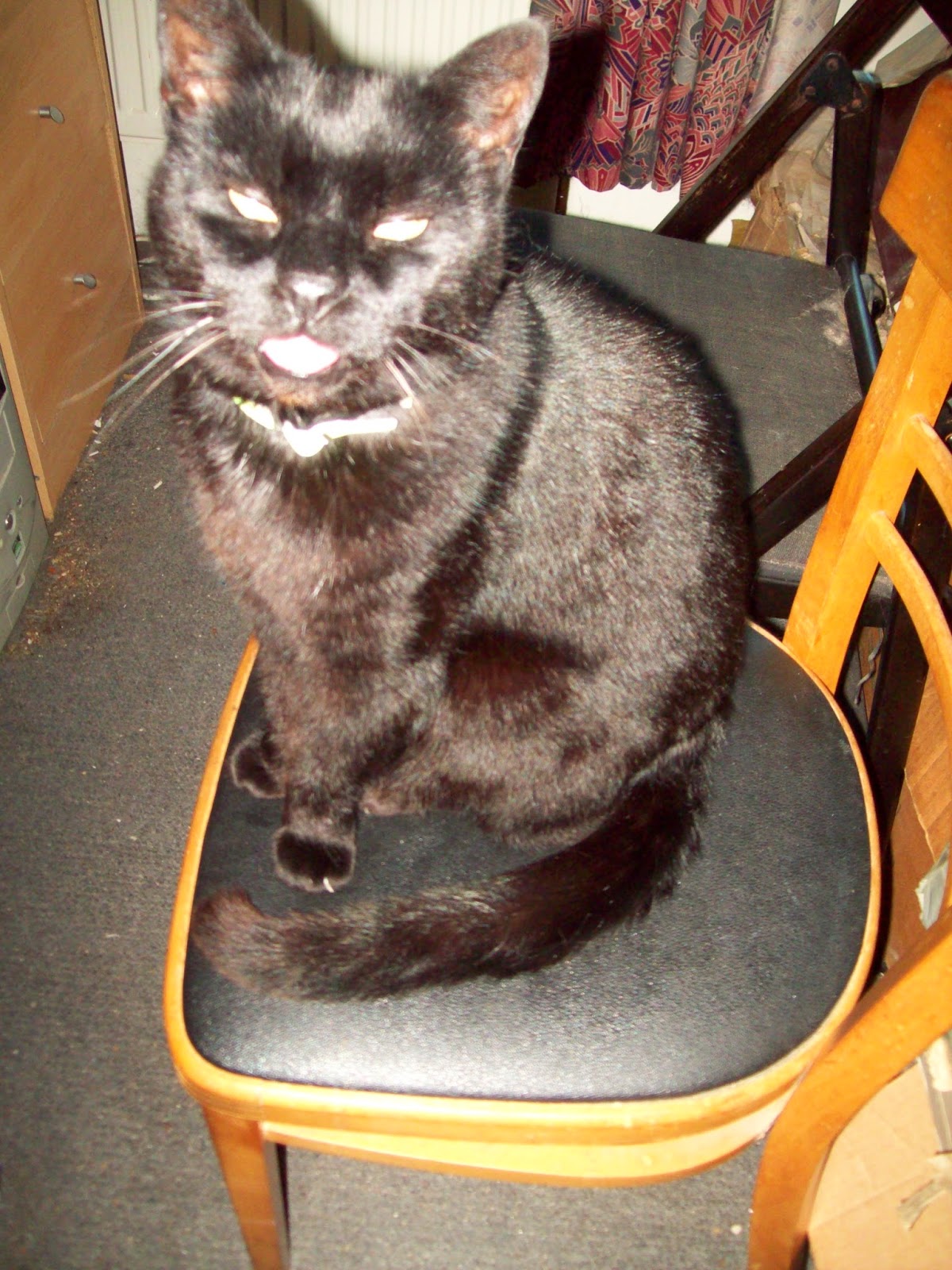 Blackso again, showing what he thinks of all my worrying about him - by sticking his tongue out. Charming!
Posted by Raybeard at 05:06