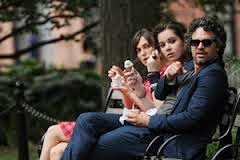 This turned out to be a most satisfying watch. I probably wouldn't have bothered with it (the trailer wasn't particularly interesting) were it not that I recall how captivated I'd been by the same director's (John Carney) 'Once' of 2006. In fact there are a number of storyline features in common with the earlier picture, and if this one doesn't quite rise to the heights of the other it was a formidable hurdle to jump. But definitely pleasing, nevertheless.


Keira Knightly once again shows what a major acting talent she is, getting better at every appearance.
Here she's a singer/songwriter in New York, now performing her songs alone in noisy bars (courtesy of friend, James Corden) after her composing partner and boyfriend has found another female muse. She's heard on chance by slobby, drinking, dishevelled, separated Mark Ruffalo (his ex, Catherine Keener), recently self-ejected from the recording company where he works as executive. He recognises Knightly's talents and wants to publicise her by means of his contacts with his former firm. (Here Mr Rrrrrrrrruffalo is as an attractive piece of 'rough/ruff' as one is ever likely to see - though, speaking personally, I could well have done without that seemingly endless supply of stinky, black cigs he's always puffing on. Yuk!) He also has a 14-year old daughter with a knowing, rebellious attitude whom I also found oddly attractive. (No not in that way!)
There's a greater number of songs one might have expected, and which I did find surprisingly appealing for the most part. Miss Knightly has a very capable voice; though firmly in today's style it's one of those where I feel that a little more projection would have improved it. With a hastily convened supporting group consisting of keyboards, guitar, drums, violin and cello, some of the songs are performed and recorded alfresco at various city locations. (The setting for one of the climactic numbers reminded me of the Beatles' rooftop performance in 'Let It Be').

I was half-expecting that a romance would develop between the two leads, but all I'll say is that the main romantic focus remains between her and her former live-together, songwriter-partner, (Adam Levine, also fine) and it's not a dull one. Maybe the film's very end was ever-so slightly cheesy, but it wasn't detrimental to the whole. (Note: There's a gathering together over the final credits of some loose ends, which I very nearly missed.)
The script is a further 'plus' - consistently alert, sharp and, to me, un-guessable.

The rating I feel inclined to give makes me feel a little guilty that it would make it higher than some recent films I've seen which, on reflection, deserve a mark higher than I allowed at the time. But all my scores are very much 'snapshot' feelings of the moment which can change with time in either direction, which most of them do - and anyway life is just too short to keep on adjusting for evermore. So, as at now, 'Begin Again' gets a....................7.

(For a very alternative review do visit Blobby's Blog @
http://www.blobbysblog.com/2014/07/do-it-again.html )