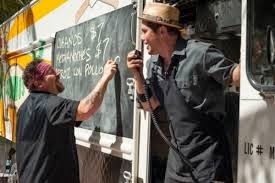 From the trailer this looked to be passably entertaining - and so it turned out to be. Nothing more than that, but not less either.

There was one particular reason why I was reluctant to see it. I never watch any of the TV programmes concerning 'reality' cooking/competitions. Not because I wouldn't find them interesting, rather that I try to avoid the sight of meat or fish either being cooked or the finished product on a plate. In a restaurant with companions it's a mental hurdle to block out what others are having, which can be just a few inches from my face, though I've never mentioned it - at least until now, here. Luckily(?), restaurant visits these days are far less frequent than at one time. In the last twenty years, perhaps twice or thrice.

So, braving it with gritted teeth, I thought that, nevertheless, the film looked like it could be fun. In the event there was only one on-screen incident that was particularly difficult to watch, and it comes in the very opening few minutes - an entire pig's carcase being decapitated - though it's not shown with any protracted, grisly relish.

Jon Favreau takes both Director's helm and main role. (He directed the first two Iron Man films - as well as having minor parts in each).
He is senior chef at Dustin Hoffman's (just three brief appearances) L.A. restaurant (public face - Scarlett Johannson, with black hair) when he clashes with his boss on the menu after getting a stinking review from an influential restaurant critic (Oliver Platt), which goes viral on Twitter. He wants to change the menu but Hoffman insists on sticking to the tried and tested reliables. Result - Favreau leaves.
Visiting Miami with his ex (Sofia Vergara) and their 10-year old son, she suggests he turns to cooking and selling Cuban specialities. With a filthy and rickety mobile kitchen supplied by his ex's ex-husband (Robert Downey Jr in just a single scene) and with the help of his former, earthy-humoured assistant chef (John Leguizamo, whom I don't think I've seen since 'Moulin Rouge' of 2001), who has also left his newly-promoted sous-chef position at the restaurant, they get themselves set up, son assisting in major way, and are out on the road, their food products being a huge success immediately with money being raked in.

That's it, really. A film of two halves, the first in the restaurant, the second in the mobile kitchen - both halves equally entertaining without being anything extra-special. I did find much of the food, while being prepared and cooked, and in finished form, looked ravishingly tempting. I don't think mine was the only stomach that was rumbling.