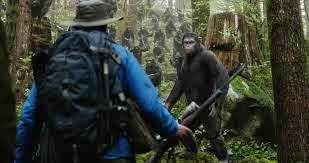 I found this, on the whole, humdrum and formulaic, though there is no doubt that a lot of the imagery is quite remarkable, even in the flat-screen version in which I saw it.

Few could deny that Pierre Boulle's original idea in his novel 'La Planete des Singes' (usually translated as 'Monkey Planet') is an arresting one. But it's a concept that doesn't bear stretching over one, let alone several, sequels.
I saw the original 1968 film on its release and would maintain that it finishes with one of the most astonishing endings ever to be encountered in the cinema. It still sends a thrill through me thinking of that first time when I'd been sitting through the film with a friend, only I'd been seething and fuming throughout at such a silly idea as apes, not only talking in English, but English with an American accent! (As though speaking with a British accent would have made it any more plausible!). Then only to be put firmly in my place in the final frames and its jaw-dropping moment of revelation. (My friend had not been so disturbed with talking apes as I was, but he was also a 'Doctor Who' fan back in those days of daft plots, dodgy modelling, shaky scenery, fluffed lines, appalling acting - he just took the lot in his stride).
I saw all the sequels to the original (Beneath/Escape from/Conquest of/Battle for) and each one demonstrated that you can't do much more with the idea other than repeat oneself - the boredom increased with each instalment.

Then we had the forgettable Tim Burton 2001 re-make of the original. Despite its ending being much closer to Boulle's novel (which I read sometime in the 70s), neither on film or in print could the 1968 film be bettered.
I didn't bother with the sequel 'Rise of', though it did get a number of positive reviews. My revisiting of the franchise shows that nothing of note has been gained.


After that long preamble, down to specifics of 'Dawn':-
Directed by Matt Reeves, the extremely convincing anthropomorphising of the apes in this film meant that I didn't have to be concerned, as I normally might have been, with seeing animal suffering. Anyway, so much of it was plainly CGI'd (including opening sequence of hordes of apes hunting wild animals) that I didn't once have to look away.
A negative for me is that there is 'signpost' music almost non-stop - a lot of it, I imagine, intended to indicate what we are to feel, ape faces being rather more inscrutible than human ones. The film-makers seem to think that we need a guide as to our emoting. It got in my way for much of the time.

Andy Serkis as king ape 'Caesar' does as efficient a job as ever in his CGI-superimposed role (he was, of course, also Gollum in the LOTR trilogy). As to the human acting it was fair enough, though I did wish that Gary Oldman had been stretched rather more.
The power-struggle plots, both between apes and man and rebellion among the apes themselves (after we were shown that there are a number of human survivors following the escape of a deadly virus) were not especially original.

I did admire the look of the film, and they are certainly taking what's possible to depict on screen to high levels of excellence. I don't know that if I'd seen this in 3D it would have increased my rating. If you like the idea of this concept in sequels then this should not disappoint you, though I felt its potential had burnt itself out before it had hardly started...............................4/10.