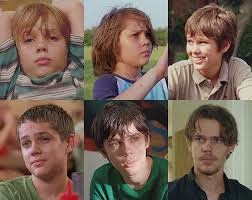 This film is utterly astonishing. If it doesn't finish up in my Top 3 of the year I shall eat my 'smalls' and post the video right here. In fact, there's a good likelihood that it will receive my internationally much-coveted 'Silverbeard' award for best film of 2014.

But first a small, excursionary amble:-
Last week I was bemoaning the fact that I was going to miss this film due to my having to watch out for Blackso, in his scary, hot-weather habit of taking refuge by sleeping under parked cars. In fact yesterday morning my heart did a backward flip when I happened to look out of the window, only to see a black tail disappearing under a nearby parked van. Because of the torrid weather (and for no other reason) at that moment I was in an advanced state of deshabille so, always fearing that the driver of said vehicle may suddenly return and attempt to drive off before I've managed to get outside, I hurriedly had to find something to throw on to conceal my exposed (Don't look, Ethel!)   ..........PUDENDA!!!    With task duly achieved, I managed to dislodge the little fella from under there (Blackso, I mean!) and bring him inside, much to his evident irritation.

Anyway, that's all by the way.
Through one of those felicitous happenstances, 'Boyhood'  turned out to be actually showing, with no advance announcement, at one of my two hometown cinemas, this one normally only specialising in non-intellect-demanding 'blockbusters'. Did the gods interecede for me? They must have, as it was just about the unlikeliest film they could have chosen to screen. And (a lesson for them) it turned out to be a well-attended screening.

Now, getting down to the subject itself:-
Richard Linklater's film shows, over a real-time span of 12 years, the growing up of a young boy into being an 18-year-old young man. Ellar Coltrane is the infant (Mason) at the start as well as the almost fully mature adult at the finish, and we see his passing through his childhood, adolescent and juvenile phases. Growing with him is a slightly older sister (Linklater's own daughter, Lorelei) who, at the start, I felt would be well deserving of a jolly good corrective smack, so odious was she to her younger sibling. But like her male co-star, over the course of the film she also matured into a most attractive young adult.
Although the focus of the film is, as the title suggests, always on Mason, it's the mother, Patricia Arquette, who is the 'glue' holding the whole project together. She is remarkable. I've never seen her better - and she plays a mother striving always to do what's best for kids yet revealing that she has feet of clay, not least in her calamitous marriage choices. (A number of times I was struck by her remarkable facial resemblance to Gillian Anderson). The children's (separated) father is Ethan Hawke, who is also the best I have ever seen him.

One thing that makes this film so extraordinary is that throughout its 2 hours 45 minutes nothing really spectacular or unusual happens. It simply chronicles the development of the young man through his family life, school, college, employment, in a matter-of-fact way - yet I was not bored for one instant. There are no captions during the film to indicate the age the boy has reached - and we don't need them, it working so seamlessly.
Often when a film is of this formidable length I'd be saying that it would have been more effective with, say, 30 minutes lopped off it, but I'd be hard-pushed to cite which scenes should have been dropped. They all melded into one, extremely satisfying, whole. And another thing - the use of background music is very spare indeed. There are snippets of songs but they almost entirely take place when sung on screen by the characters themselves at some event or on the car radio. They or not forced onto the film.

I left the cinema with some degree of puzzlement - namely, I can't work out why the film works so well - especially, as I say, when nothing of really major note happens. But work it does, and most beautifully too.
Trying to think of what I disliked about the film, nothing at all worth mentioning comes up.

If this film is not nominated for and doesn't win several of the major Oscar categories it's time to despair. It can only be that the tastes of this particular member of the public and of those privileged to vote are so far apart as to be beyond comprehension. 'Boyhood' is a beauty, a completely captivating, stupendous cinematic achievement. Congratulations to all involved.....................................8.5.
Posted by Raybeard at 02:23