A rare theatre outing - to see 'The Mousetrap'. 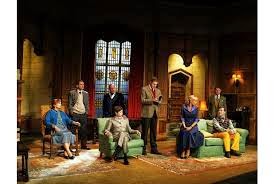 My first visit to any theatre in over three years. If ticket prices weren't so prohibitive I'd be making such excursions every week.

This is the first national touring production of the Agatha Christie murder mystery play that's been running continuously in London for 62 years - around 25,000 performances to date and counting - so, coming to my home town, not to have made the effort to see it might have been a bit perverse for the lover of live theatre which I am.
Even though I've known 'whodunit' for around 55 years I just wanted to take this probable final chance to see the famed play, despite there being a general consensus that it's over-rated and its playing so long is blocking a fine West End theatre from putting on worthier productions. (These very same criticisms were being voiced as long ago as the early 1970s, I clearly recall - and maybe before then.)

I had thought that by now just about everybody would have known who was the murderer but the audible gasps of astonishment from the audience at the moment of disclosure was a surprise - and quite a pleasant one, I must say.
I'd only got to know the 'solution' because when I was around 12 or 13 I was coming home from school with a classmate who'd just been to London and was telling me excitedly about this play to which his dad had taken him. He reeled off a list of the characters on stage and said "Now who do you think was the murderer?" It may have been that he'd given an unconscious emphasis when naming that particular individual, but since then I've not only known but have managed not to tell anyone else - exactly as one is exhorted to 'keep mum' by one of the cast at the curtain call.

The single stage-setting  is the lounge of a secluded country guest-house (during a heavy snowstorm, would you believe?) where a motley collection of patrons arrive in ones. We learn at the outset that there has just been a murder in the vicinity at a seemingly unconnected location and the police have a vague description of a suspect. I shan't attempt to list the various guests without a programme in front of me as if I inadvertently miss one or my description of a particular person is wanting one may conclude that that individual is not the killer. Suffice to say that anyone who has read any of the authoress' murder mysteries will recognise the stock type of characters she's created here.

It's a 'wordy' play, despite there being a second murder, this time on-stage. I gather that at some performances in London a significant proportion of the audience nowadays consists of Japanese or other non-English-speaking tourists, who wouldn't have a clue as to what's going on - and are tempted to take photos during the performance despite strictures not to do so. No such distractions in the packed-out performance I attended.

I'd thought some of the acting might have been pretty ropey (no 'big' names in the cast). Some of it was indeed a bit mannered but I must say that on the whole it was surprisingly good. Of course one can also speak of the dated-ness of the dialogue, which does sound creaky at times, but that's like criticising the language of Priestley, G.B.S. or Wilde, even though we're all aware that Christie hardly rises to their standards. But if one accepts it as a product of its time, it passes muster.

Btw: In about 1990 I attended in London a one-person charity benefit by Sir Ian McKellan raising funds for AIDS research and care. He told the story about how he'd been accosted by a rude gentleman in the foyer of the theatre where 'The Mousetrap' was playing (Sir Ian may at the time have been raising funds for the same cause there). This person was about to enter the theatre proper when I.M. exacted his revenge. He called out to the guy "By the way, ....... did it!"
He apologised to the audience at the benefit for revealing the killer's identity but he thought that by now just about everybody knew in any case, though as this performance I went to proved, a lot of people even now still don't.

I've bought and kept the programme for every single play, concert and opera I've attended in my entire life -  until now. The price of this one was a crippling £8 (about $14 Am.), a third of the price of the actual ticket! So, with great regret, no thanks.

I'm pleased I saw it. It wasn't an experience of memorable cherishment as far as theatrical events can be, but it was quite good fun - and is, after all, (justifiably or not), a landmark play in British theatre.