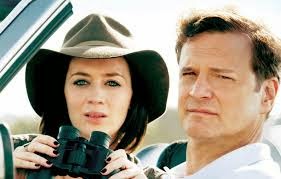 This is an oddity - which makes it sound more interesting than it was.
The film is actually two years old and has probably been languishing on a shelf, gathering dust, before being transferred to DVD. It only came here for a one-off, morning screening and, notwithstanding the omens (and indifferent reviews), it looked okay enough on paper for me to toddle along. Bad decision.

Colin Firth and Emily Blunt (latter as 'Michaela' or 'Mike') play American. Is there nothing the man Firth cannot do - apart from giving us all a break? (At least six more films from him in the offing, including the new Woody Allen. Oh, saints preserve us, please!) Anyway, this time he plays an identity-switching former golf-pro who fakes his own death by drowning in order to escape his ex-wife (with resentful son, annoyed at his dad's greater interest in golf than in himself). His ex is played by Anne (closet gay or closet straight? Take your choice) Heche, though with nose that's definitely straight, who doesn't seem terribly cut up about his vanishing act. However, Firth (no fool he!) 'disappears' with a bagful of $29,000 in low denomination notes.Very soon circumstances throw him and self-pitying, whingeing Emily Blunt together who, by one of those coincidences that only happen in film, find that not only do they both have assumed identities but they also share a penchant for travelling hither and thither, breaking into strangers' homes (after checking on their times of absence) and availing themselves of the 'facilities'. (Oh, what merry japes they get up to! Laugh? I could hardly contain my ennui!) An engaging couple in the style of Bonnie and Clyde they are not! I found them off-puttingly exasperating from the start. The prevailing mood engendered in yours truly was one of wanting them to be nabbed, caught in flagrante delicto, which they actually are (literally) at one point - but, maddeningly, they always manage to scarper before being caught.

I couldn't relate to this film one bit. If it had tried to pass itself off as something a bit zany in the style of those tongue-in-cheek crime capers of the 60s and 70s it might have worked. If that was indeed the mood it was aiming at, I can only think that it misfired badly.
This is director Dante Arola's first feature film, so I suppose by starting on such a 'downer' he ought only to get better - though after this I shan't be rushing to find out his next project..............................3/10.