First time I'd been to the annual Pride parade, this country's largest outside London, for about 5 years. Since a few years ago, this is now the only part of the day's events 'open' to the public - the post-parade events, including music acts and refreshment marquees, entertainments and fairground rides, are now only admitted with ticket, the on-the-day price being £25 (about $42 Am), being beyond my own means. But the parade itself is well worth seeing - modest in comparison with those of bigger cities worldwide (no huge floats), but no less replete with big heart and sense of fun and humour, and noisy as one could wish - or wish not, as the case may be. Here's a flavour:- 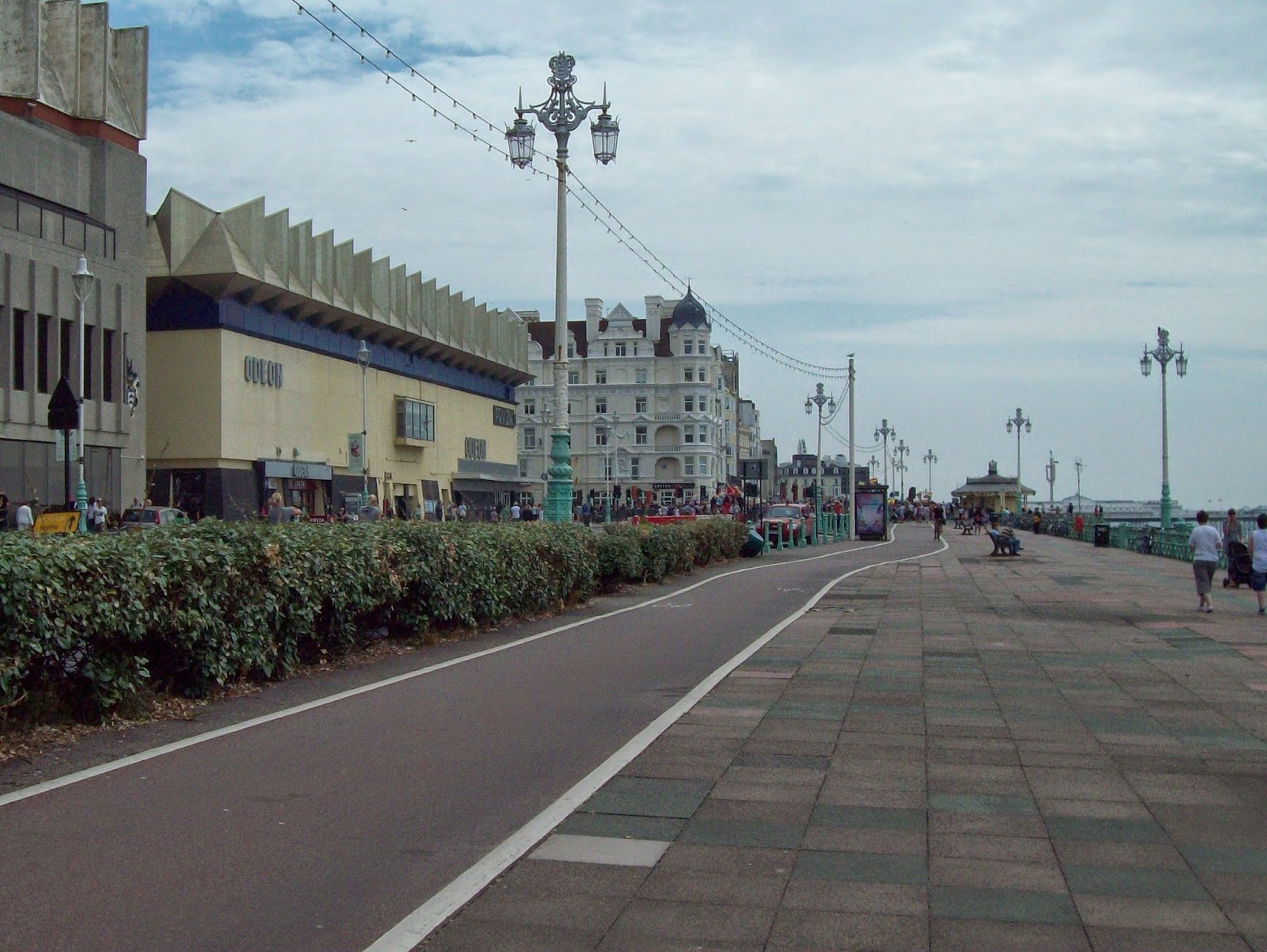 Because of traffic diversions due to the event I only arrived after the parade had started moving, so missed the first features. I'm here approaching one of the turns on its route, with the yellowish building on the left, being the 8-screen Odeon, the cinema where I do much of my mainstream (non-art-house) film watching. 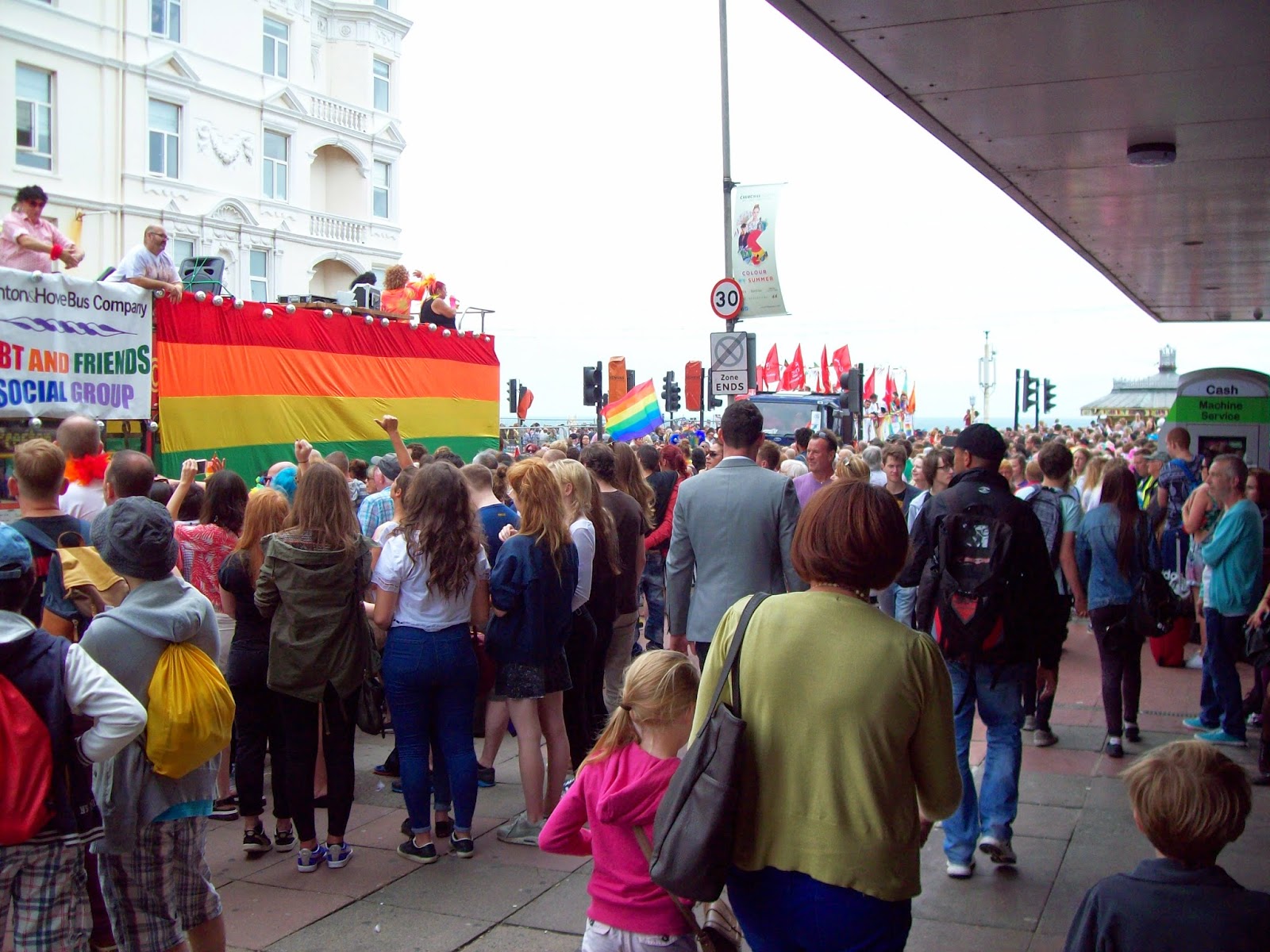 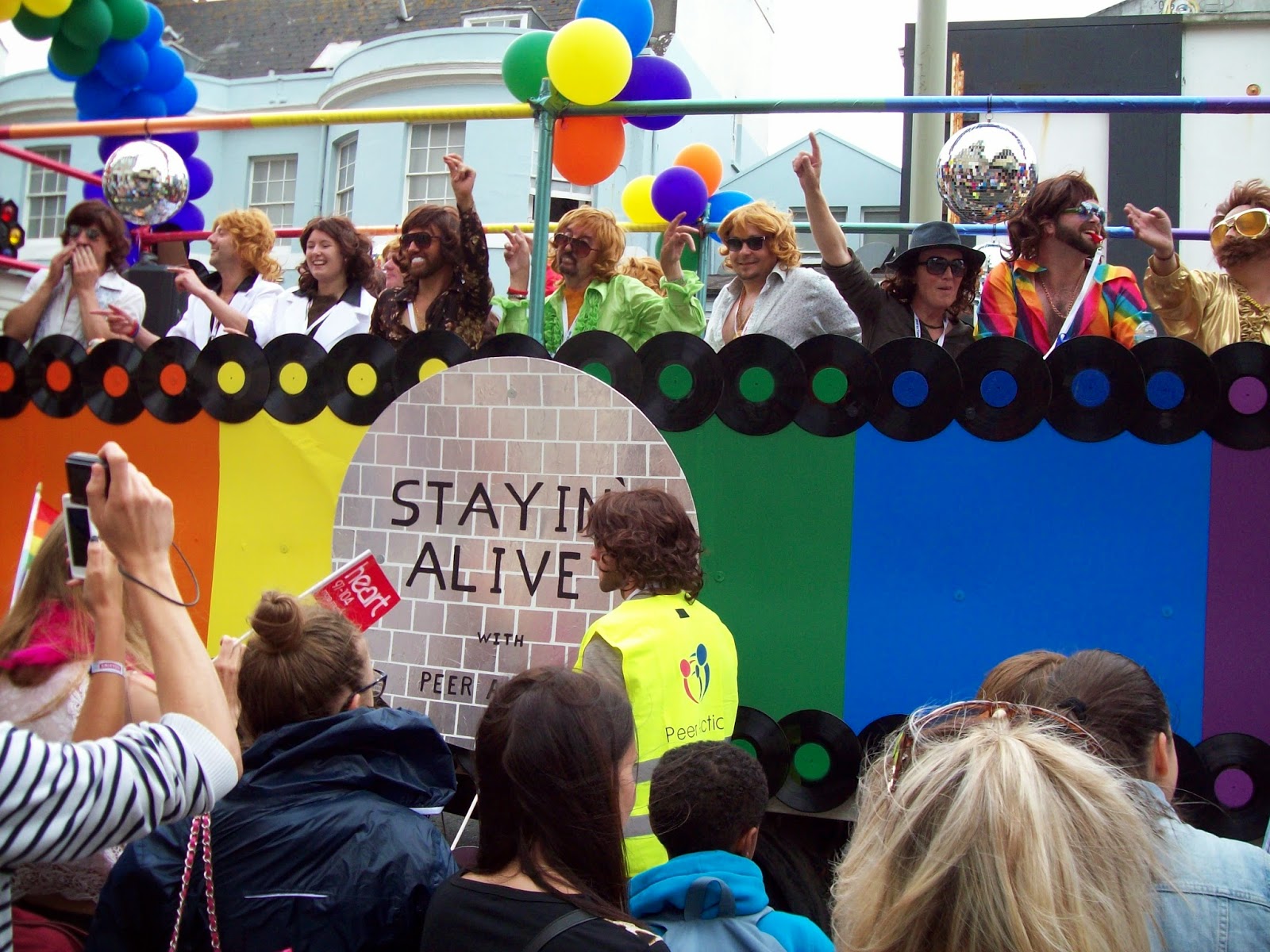 A certain other group, blasting out.....well, what d'you think?.....as sung by the local Gay Men's Choir 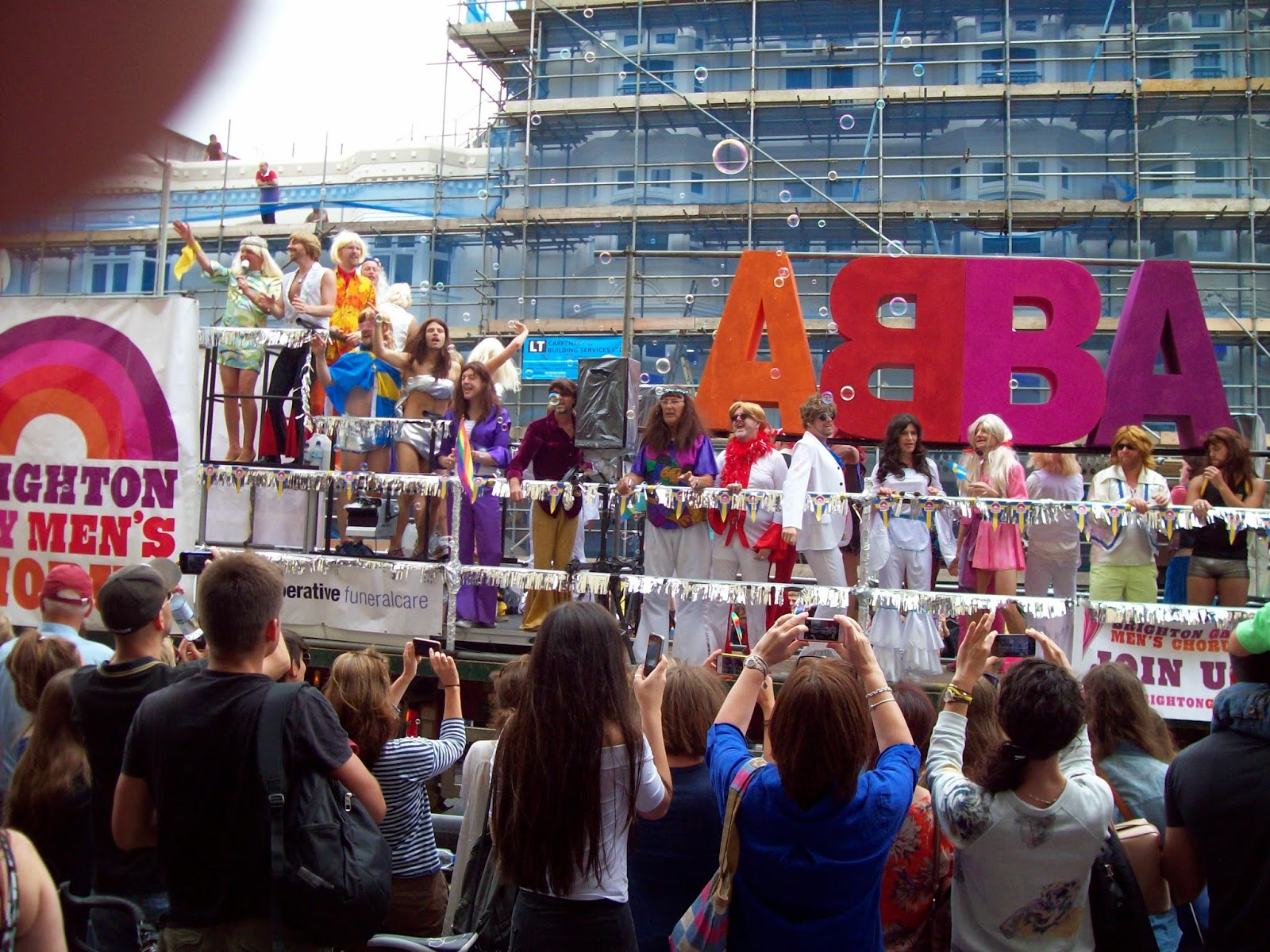 The 'Section of Shame:-
Placards announcing names of countries which criminalise gay relationships and activity as well as its 'promotion'.
Following it one entire section was devoted to Uganda, which got a huge cheer, especially one guy carrying a notice announcing that he was proud to be Ugandan and gay. I really wanted to cry - and to go out and hug him. 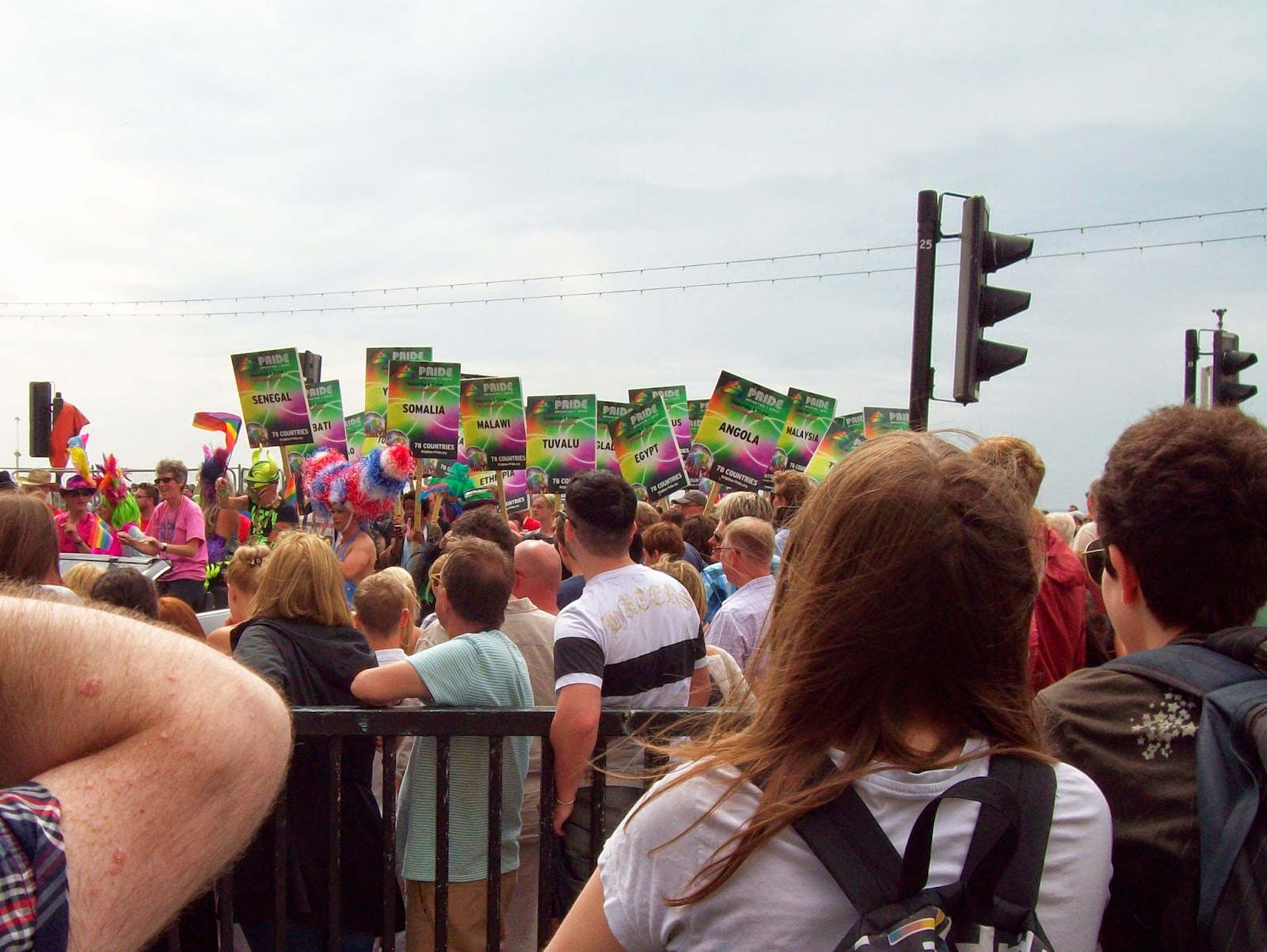 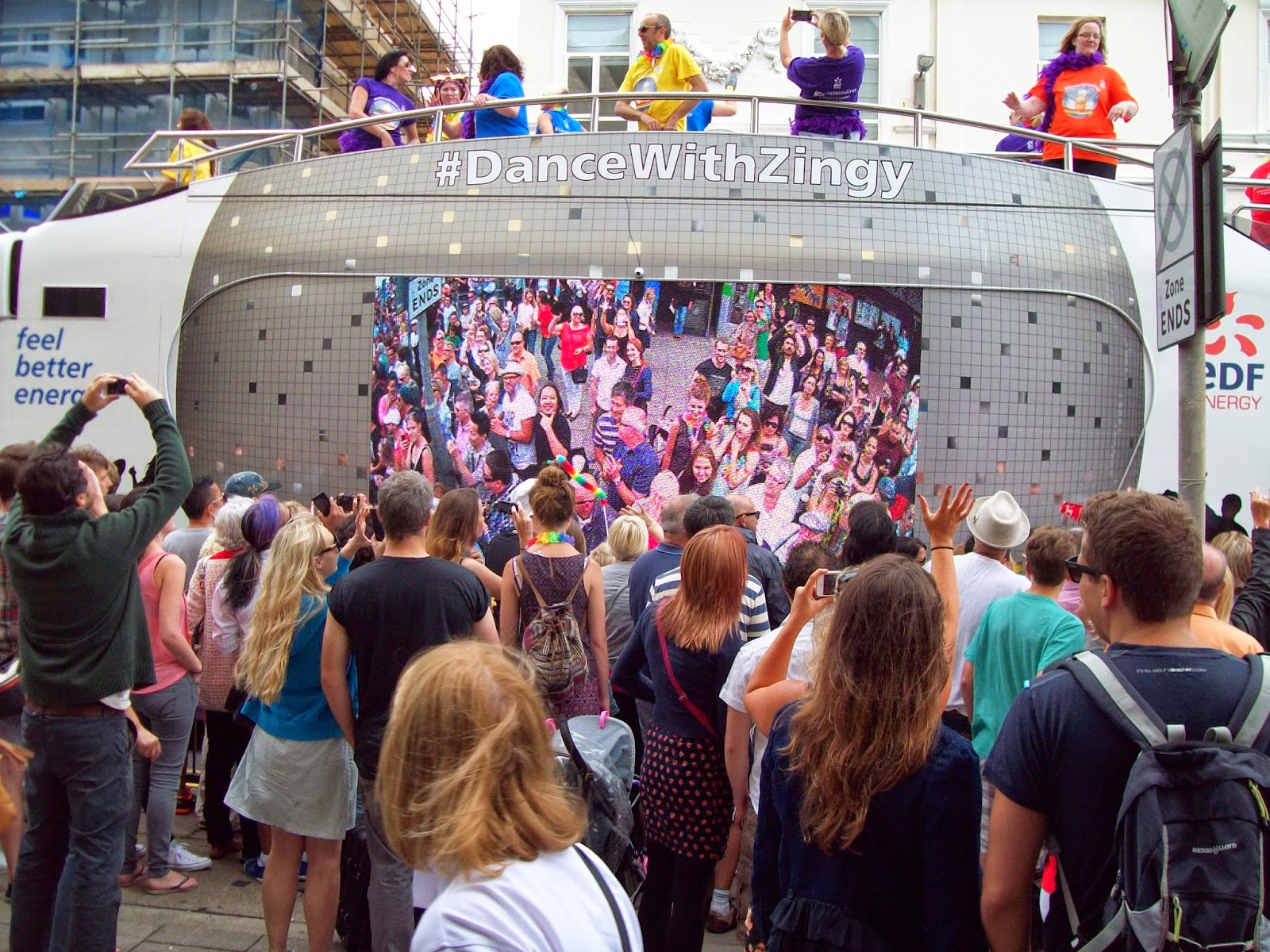 Above, this float filmed the onlooking crowd as it slowly drove past, projecting them onto its screen. I'd hoped to photograph myself but didn't time it right.

The end of the 'bears' section - standing behind the half-clad big-bellied chap wearing a bulls head is another guy in black rubber suit with dog-head mask being led on a lead attached to his collar by another leather guy. (Ah, the memories!) Wish I'd got a close-up of these, but there's bound to be some when the official photos are published. 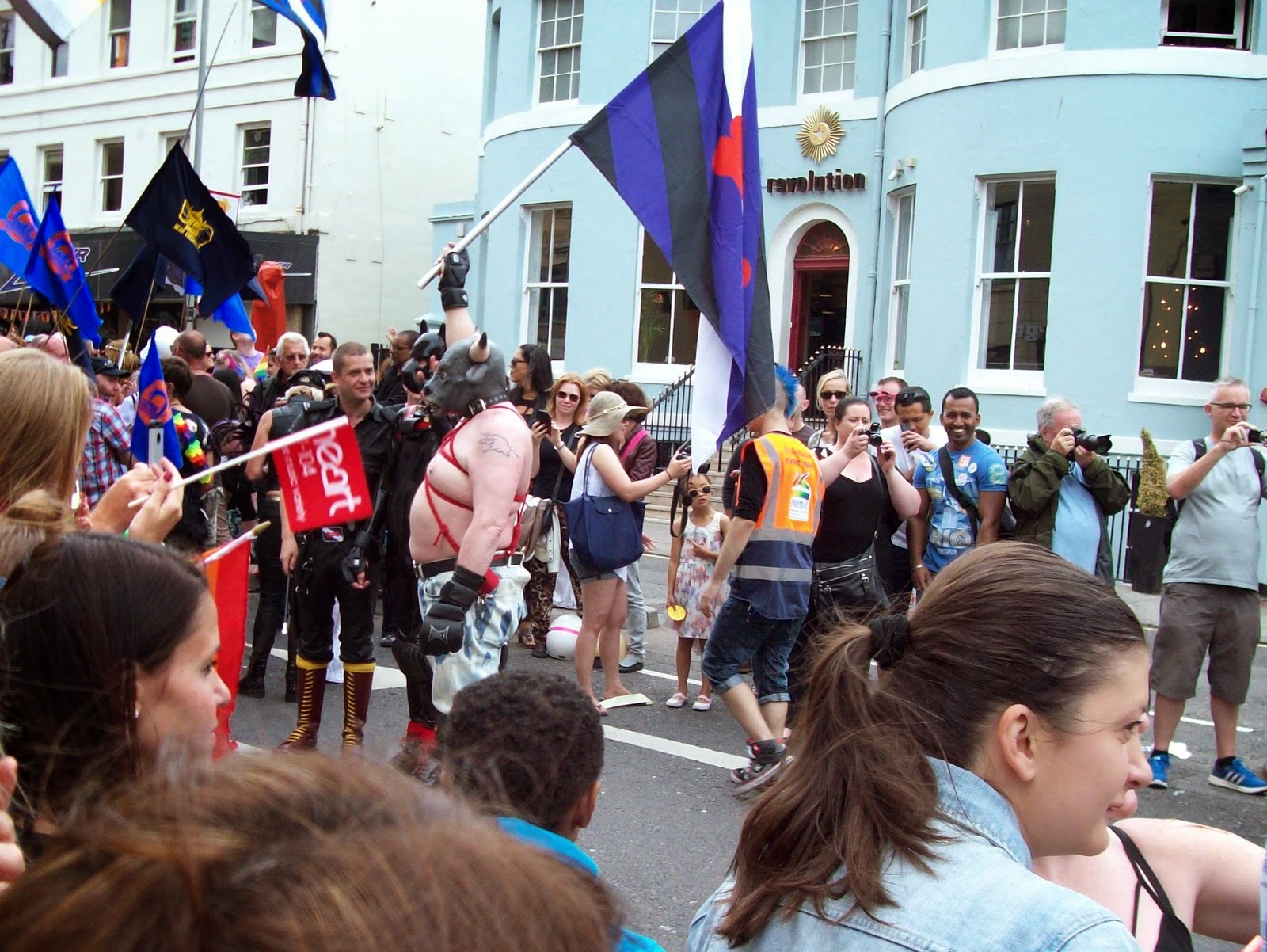 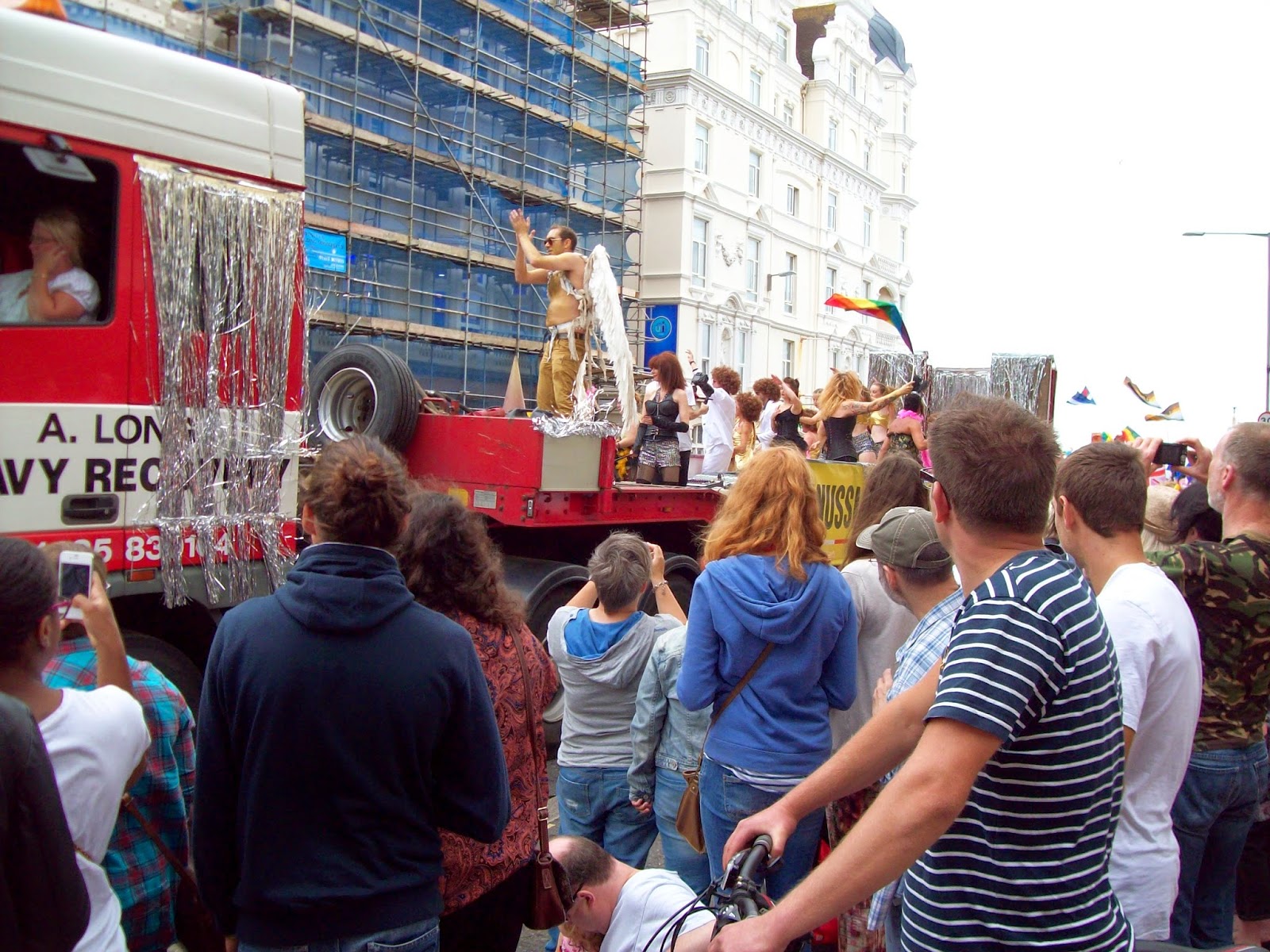 Above, 'angel guy' on float- a bit distant, I'm afraid. 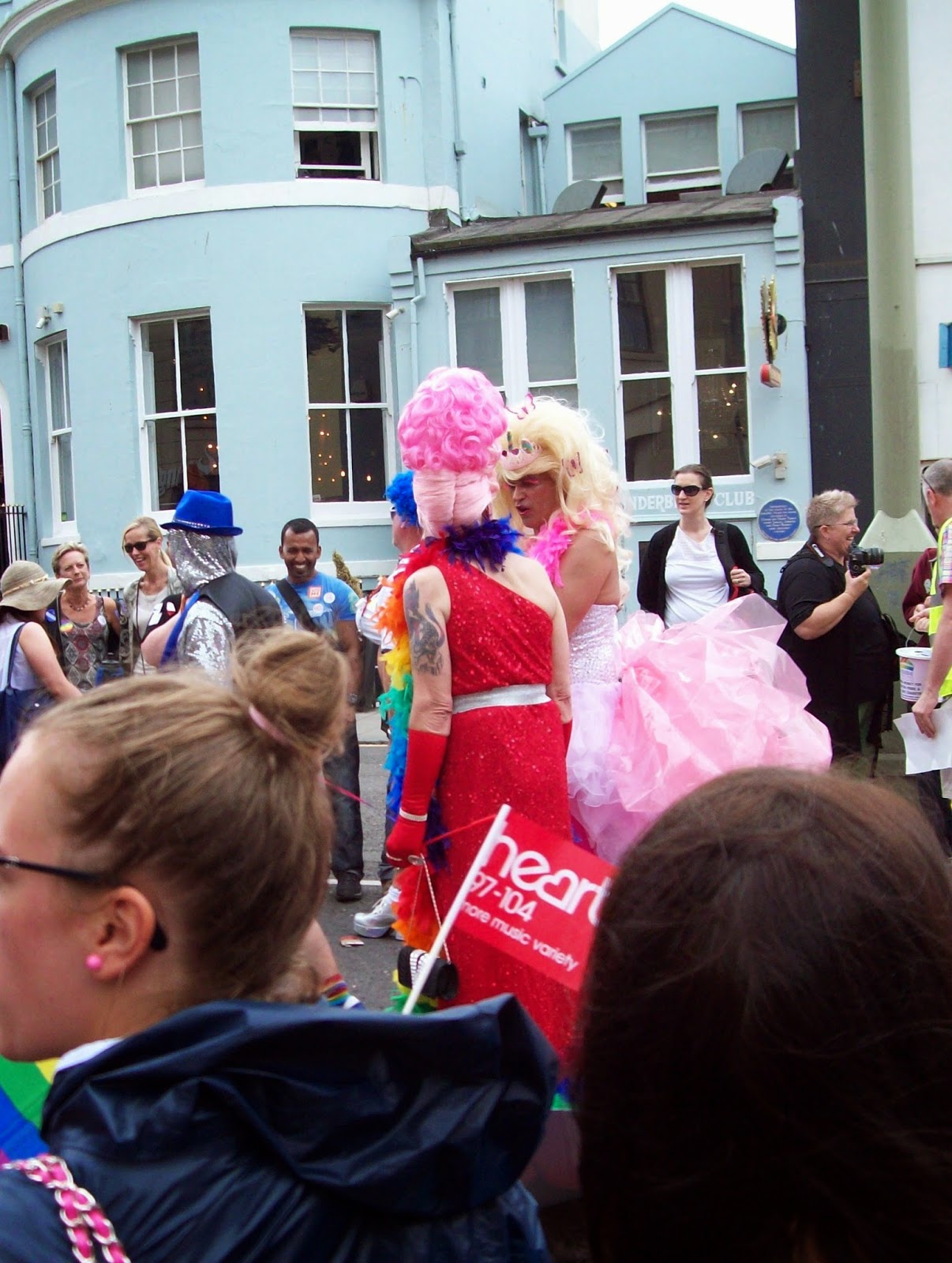 And finally, bringing up the rear, we all like to see policemen efficiently mounted, don't we? 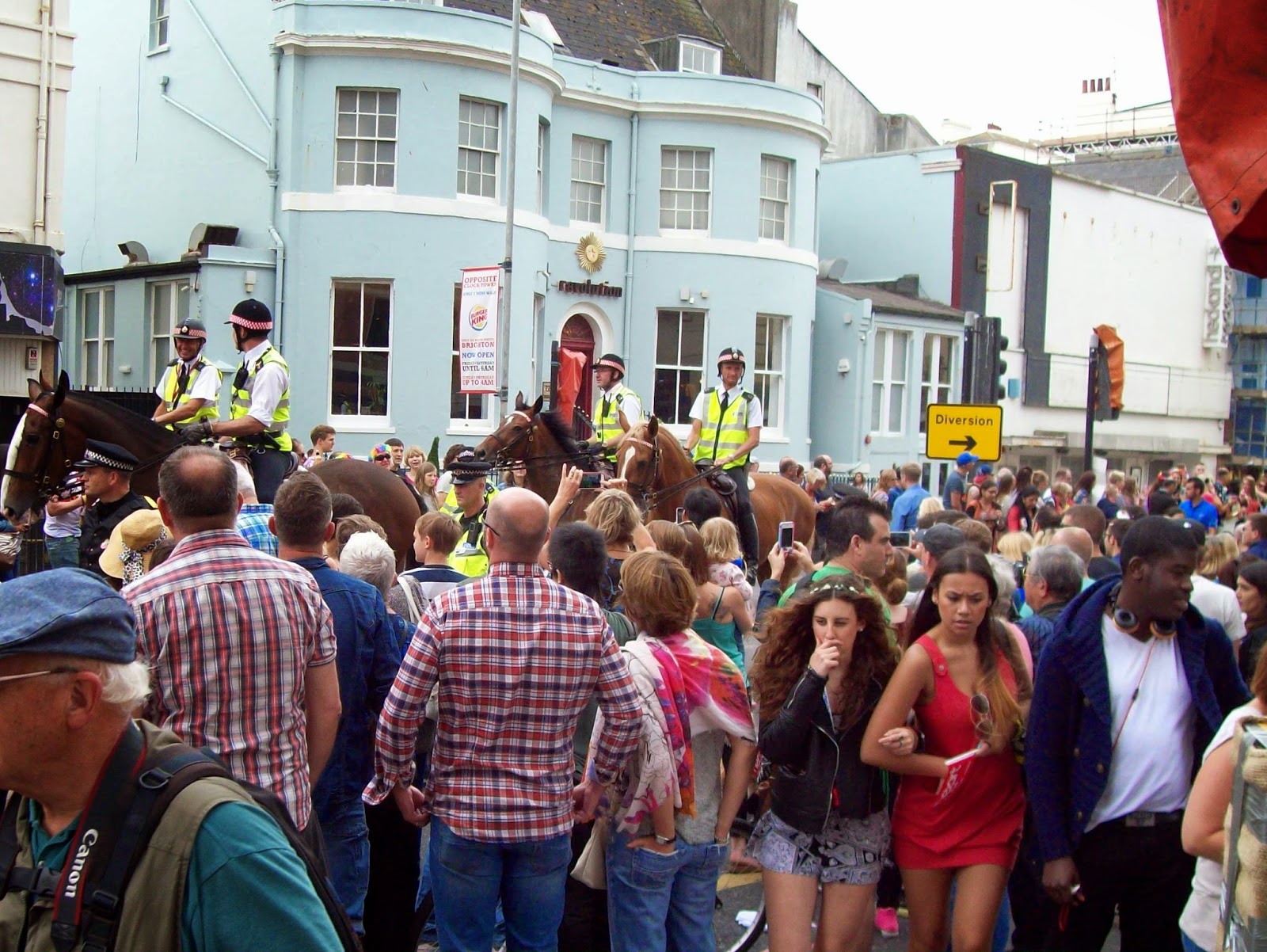 Pity I don't have a more versatile camera. I took a lot more than what I've posted here but these should give you some idea. Till maybe 2015, then.
Posted by Raybeard at 08:53