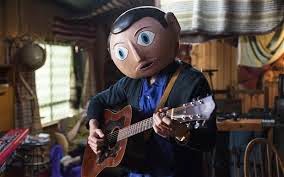 Not quite the bizarre, homourously-slanted film I was expecting, this is a tale of an aspiring young composer and keyboard player (Domhnall Gleeson) who gets reined in, almost by accident, with an ambitious group of odd-ball musicians, somewhere in England, fronted by lead vocalist and composer, Frank (Michael Fassbender), permanently wearing a pumpkin-sized false head, even when eating and sleeping. Also part of the group is scowling, opinionated, contemptuous Maggie Gylenhall, who is also its sobre 'anchor'.

I wasn't acquainted with the journalistic origin of the source idea for the film and its characters, which are apparently quite well known in music circles, so I came to it as an 'innocent'. I don't think that not knowing the background to its inception hinders its appreciation.

The film (Director: Lenny Abrahamson) does have its comedic moments but it also goes to some very dark places.
Only Gleeson's fresh-faced newcomer seems curious to find out the reasons why that head is being worn, the others either already knowing and won't tell as it doesn't matter any more or, more likely, it's unimportant. I was ready to go along with the latter viewpoint as part of that character's quirky personality. When they travel from their isolated Irish island recording 'hide-out' to attempt to hit it big in America, there the head is not commented on or even given a second glance by members of the public who are coming across the group for the first time. Still fair enough. But all this is undercut by the fact that, near the film's close, we are given an explanation-of-sorts for the head. (I shan't say whether or not we are ever given a view of the real Michael Fassbender underneath.)

I'm aware of my tendency to mark down a film where my expectations are confounded, even though it shouldn't necessarily be so, and one ought to treat elements of surprise as the positive attribute they can be. Having said that there was something about this that didn't really gell with me. It seemed to strive to be both ambitious yet small-scale but tripped over itself in its execution. I think the Coen brothers could have melded the moods more successfully with their ability to give a delicate touch to situations which, in other respects, could be seen as tragic.

A flawed film, then, though it certainly does have some entertainment value - and throughout one is always wondering about that massive head even though this particular viewer would have felt more satisfied if it had been left as unexplained..............................6.
Posted by Raybeard at 23:54