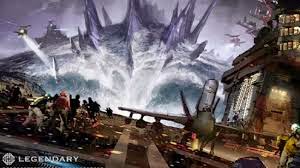 This film starts very impressively. Do the opening scenes maintain and deliver their promise for the film's remainder? Yes, they do.

I had deliberately not seen the 1999 Roland Emmerich/Matthew Broderick version because of practically universal negative reviews so I can't compare. But whatever that was like, I'd say "Forget it! This one would be extremely difficult to surpass."

Director Gareth Edwards has already produced the high standard, minuscule-budgeted 'Monsters' of 2010 - an object lesson on how to deliver good quality entertainment on a shoestring. (I understand he produced all the CGI effects of that film on his own computer in his bedroom - and it doesn't show at all on screen.)
Here, for Godzilla, he's given his head with a multi-million dollar package to play with and, in no way disappointing, he yet again pulls out wonders, as he should with his many times huger resources!

Most of the first half of the film is set in Japan, disclosing how the monster inadvertently came to be generated through nuclear tests back in the 1940/50s. Then it moves briefly to Hawaii and then to California.
Aaron Taylor-Johnson, an English actor whose name I didn't recognise until looking up his credits, plays the American lead, assisting the army in its fight by imparting information which his father (Bryan Cranson) had been collating about the effects of the nuclear tests. He actually plays someone one cares about, a character with more background than the usual ciphers  we see in such roles. Unfortunately the same cannot be said about the marvellous Sally Hawkins whose appearance, almost entirely in the first half, is purely functional and could have been performed by just about anyone. After that we see almost nothing of her.

Not knowing the original story I'd assumed that there'd be only one monster, that of the title. Far from it. I say no more.

The special effects are really breathtaking throughout - and there are many imaginative touches involving bridges, trains, tunnels, ships, aircraft and God knows what, all looking as fresh as if we are seeing such for the first time
It takes a lot to impress me since CGI came along, but I have to aver that  some of these are truly amazing. I was sitting literally open-mouthed for much of the time.
The action rarely slows - only for the emotional scenes involving the male lead and his family, but they don't spoil the pace. In fact the entire film, at two hours in length is, though long (actually rather short for films of this ilk)  it doesn't outstay its welcome.

I'd strongly recommend that this be seen in 3D and on the biggest screen available to you. It would be a shame if the capacity to knock one back in ones seat is diluted.

I'm within a whisker of endorsing this film with an '8', and if I did I wouldn't have been afraid of inviting potential ridicule. But I think if I had done so I might be regretting it on the morrow as it being not as profound as other films to which I have already accorded that very rare score. So, seeing that 7.75 is not available in my own rating system, I'm more than happy to award this 'Godzilla' with a still splendid ........................7.5
Posted by Raybeard at 09:21