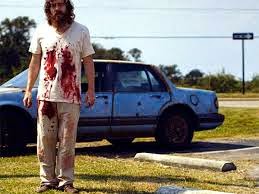 Lean, efficient and sparely scripted revenge drama with a handful of moments which score high for gruesomeness.

I'd heard of neither director/writer Jeremy Saulnier nor of principal actor Macon Blair who carries the entire weight of the film and is, in fact, hardly off-screen at all.

Little, if any, background information is provided when we see the unkempt and straggly-bearded Blair at the start, apparently a hobo leading an aimless life in small-town Virginia. When he learns that someone who killed both his parents is about to be released from prison he's determined to exact revenge, which he does but without thought that he himself would then become a target as a consequence. Undergoing a radical transformation by having a shave and tidy-up, it's then a matter of his awaiting and being prepared for his pursuers before he becomes their victim, while also attempting to secure the safety of those near him who could additionally be targeted for further vengeance

It's a simple but suspenseful tale. He learns, as do we, of the motive behind the murders which started off this chain of events. There were at least two points in the story where I was reminded, bizarrely, of 'Home Alone' and, more pertinently, 'Straw Dogs'.
Macon Blair takes on the central role brilliantly and credibly, conveying well his internal struggles between self-preservation and the utter distaste for his necessary actions.

At a sensible ninety minutes this film shows yet again that one doesn't need a sprawling discourse of epic length nor a bank-busting budget to deliver good quality entertainment. Well recommended, though one does need to have a strong stomach for more than one of the happenings............................7.5.
Posted by Raybeard at 11:53