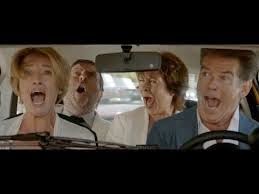 Spectacularly unfunny crime-caper 'comedy'. An object lesson in how to be UNamusing - by thinking that a situation in itself just needs to be filmed in order to have us all rolling in the aisles. Well, it won't. Successful comedy requires effort, effort which must be invisible. It has to masquerade as a light touch, not be delivered as leadenly as this. If you want to experience something with more sparkle I'd suggest you try a glass of tap water!

Not even the likes of the wonderful Emma Thompson, plus Pierce Brosnan, the ever-watchable Timothy Spall with Celia Imrie can pull this together.

Brosnan and Thompson are divorced from each other but have to get together to save themselves from financial ruin when Brosnan's firm is bought out by a young and dastardly French magnate - who happens to have bought a multi-million dollar diamond for his new wife, something which Thompson, by chance, happens to catch on Sky News. They hatch a plan to steal same. Bickering, as only ex's can, they go to Paris to meet the villain (La Tour Eiffel - tick! L'Arc de Triomphe - tick! And oh, in the film's final shot, Notre Dame - tick!) How on earth will they manage to survive together while being forced to spend time in each other's company? (Don't hold your breath.) They then follow their target to, where else, but the south of France to accomplish their clever little scheme, reining in local friends Spall and Imrie for assistance. Oh, and one more thing, Thompson is allergic to flowers, Brosnan to cats. Wouldn't it be a hoot if they found themselves together in a room full of both (as one does), each of them trying to stifle sneezes?. Laugh? I almost cried!

I was yawning within 15 minutes of the start of this sorry feature. But I must say it just might have been my own lack of sense of humour that stopped me enjoying it. There was one single chap in the audience who was splitting his sides. I concluded that he was either high on something (though, being of my generation, that seemed unlikely, though not impossible) or he had a canister of nitrous oxide from which he was inhaling.

I didn't know of writer/director Joel Hopkins. Including this one I see he's directed only four films to date, all of which he's written himself. If this is anything to go by I shan't be looking forward with any measure of eagerness to his next feature.
The only thing that makes me give this as 'high' a mark as I do is because I don't want it to be any lower than the score I gave to 'Labor Day'. At least the latter wasn't boring - and it was funnier.........2/10
Posted by Raybeard at 08:12