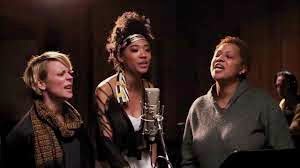 I'd been hoping for something extra-special from this Oscar-winning documentary (director: Morgan Neville), but for me it failed to muster up anything more than moderate interest.

Dealing with backing singers to world-famous celebrities from the 1960s up to date (here almost exclusively African-American and female) on both recordings and on stage, it's a series of talking heads, plus some live singing, by a few surviving singers themselves, most prominently Darlene Love (whose name was only on the margins of my awareness) and Merry Clayton (who wasn't). These are interjected by brief comments from the likes of Springsteen, Wonder, Jagger and Sting, all of whom basically say what marvellous voices these singers have. Hardly surprising.
There's some relating of failed attempts to achieve fame in their own right, only to be stymied by such powerful pop moguls as Phil Spector, determined that there were to be no rivals to Diana, Tina, Whitney, Mariah etc.
There were no great insights for me. I felt that all that needed to be said could have been achieved in twenty minutes instead of the ninety that this takes.