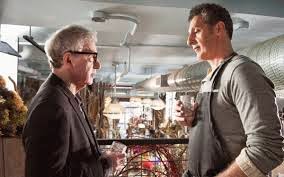 Reasonably diverting (though to me also somewhat confusing) film from writer/director John Turturro.
I think I'd not have been alone when hearing about this film for the first time and being told that Woody Allen was J.T.'s co-star in this, only to feel a bit deflated on learning that it's not one of Allen's own self-written and directed films. But his character here does have all his unmistakable traits (stumbling conversation, ever-victim, unfortunate scrapes etc) and quite a few funny, quick-witted repartees, which I'd guess were largely his own contributions to the script.

I haven't seen Allen in a film not directed by himself since 1991 in 'Scenes from a Mall' with Bette Midler (apart from a voice in the animation 'Antz') - and it is a refreshing change even though his character is the one we already know so well through his own films, and which is one you can either take or leave; which I do take.

The two main actors play lifelong buddies when Allen, having to close the bookshop he owns, has a wheeze to get some much needed income stemming from a chance remark from his female dermatologist (Sharon Stone - another 'long time no see', as is Turturro himself) that she fancies a menage a trois with another female and a suitable man, at which Allen proposes Turturro's name before even consulting him. With some persuasion, J.T., already holding several jobs simultaneously, finally agrees, sharing his earnings with Allen as his 'manager' as it becomes more than a one-off.
Another important, though more serious, strand of the story is Vanessa Paradis as a rather demure widow who also is the subject of Turturro's attention as masseur, her movements being observed by a curious and jealous Orthodox Jew Community Patrol Officer, Liev Schreiber, complete with big beard, ringlets, yarmulke and related garb.
In fact the Jewishness aspect has a particularly high profile in this film, culminating in a scene where Allen is abducted on the street and made to appear before a 'court' to defend his role in rumours about his breaching Jewish rules of permissible behaviour. I think there were chances missed to make this funnier than it turned out.

I found the film slightly more than merely passable. If it hadn't been for Allen's presence and that of Vanessa Paradis' quite luminous appearance on screen I would have marked it down a bit. But it makes for a reasonably satisfying and largely entertaining hour and a half................................6.