Film: 'THE TWO FACES OF JANUARY' 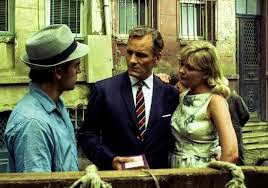 Generally pretty fine, suspenseful thriller, let down only by a perfunctory conclusion when, before then, the spring had been coiled so tightly that I thought it must snap.

Set in 1962 Athens, Crete and Istanbul, Viggo Mortensen and Kirsten Dunst are an American couple on European tour when they are befriended by Oscar Isaac as an American, Greek-speaking tour guide. It's not long before we see that, with Isaac's knowledge of the native language and the couple's ignorance of it, he's fleecing their money without their knowing it, not spectacularly at first but still significantly.
Then Mortensen's own shady past catches up with him with an unexpected visitor to his hotel sent to trace him, resulting in a confrontation with an unfortunate outcome, with the couple fleeing their hotel, leaving their passports behind, and trying to get out of the country. Isaac offers to assist them and that's when the intrigue between him and the couple begins, mistrust and suspicion on both sides, Isaac having the knowledge to use as leverage to blackmail the couple, Mortensen knowing that Isaac is complicit in what happened and helping them evade justice.

We last saw Oscar Isaac very recently in the Coen's 'Inside Llewyn Davis', sporting a bushy beard which made me go all gooey inside. Here he's clean shaven and, though for me nowhere near as alluring, I'd still not show him the door.

I first became aware of Patricia Highsmith, on whose novel this film is based, through Hitchcock's 'Strangers on a Train' what must be about 50 years ago. I read her book and was hooked straight away, lapping up very nearly all her novels and short stories in ensuing years. She yet remains one of my very favourite authors. I love reading her characters whose self-interest is all-consuming with no time to worry about such inconvenient 'niceties' as morals and scruples. Ripley was such a character, and in this film it's both Isaac and Mortensen.
Unfortunately it's so long since I read 'January' that I can't say how close this film follows the novel.

The style and look of this film (Director: British, Iranian-born Hossein Amini) reflects the early-60s era in which it is based. Actually the background music (rather good) reminded me of some of Bernard Hermann's Hitchcock scores.

This is an above-average film, well shot, never boring, though I do regret the loss of tension towards the end when up to that point it had been kept taut. My rating might have been higher had they managed the consistency of thrills better but it still gets a very positive..........................7.
Posted by Raybeard at 09:25