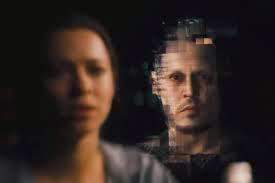 Aware of the lack of enthusiasm (and worse) that this has received on both sides of the Atlantic I took the BBC's chief film reviewer, Mark Kermode, at his word. He actually did like it and suggested we might look beyond the gobbledygook and plot weaknesses and just go and enjoy. So I did - well, at least the first part.
It wasn't long into the film before I was struggling to evince some sense out of what was going on, the reason being that much of the expository scene-setting dialogue is delivered in dialogue that's little more than mumble-talk. More on this later.

Johnny Depp is joined by a trio of British stalwarts, Rebecca Hall, Cillian Murphy and Paul Bettany, with Morgan Freeman also along for the ride.
Wally Pfister take's the director's helm, having past form on contributions as Director of Photography  on such fine films as 'Inception' and 'Memento' among others.

Depp is a leading scientist in the subject of artificial intelligence, with ambitions to create a virtual brainless mind without limits on knowledge and mental capabilities. He's shot by.....who? Religious fanatic? Luddite? Political enemy? Science rival? All becomes clear in time......or it ought to have done. The good doctor dies shortly after, but not before his wife, Hall, downloads all that's in his conscious and subconscious mind. For the major part of the film Depp only appears on computer screens as his consciousness is resurrected and he's once again able to communicate with the physical world, despite the fact that his body has been cremated, giving instructions as to what to do next to further his wishes. (We'll gloss over the question of the whereabouts of the camera which shows his talking, after-life face.)
The plot goes into lengthy development of an idea to regenerate physical injuries, which confused me. And who exactly is this mysterious gang kidnapping Depp's colleague (Bettany), and trying to find out all about the project? Do they want the secrets for themselves or to destroy it all? Search me! There's some, what I take to be, unexpected changes of allegiance between the main players but by then I'd given up caring.
Freeman (not playing God) is always a significant presence on screen, but doesn't really have much to do here. Maybe they wanted to give the film some added weight, which on the whole he does supply.
There's quite a bit of computer-image trickery during the entire course of the film, but nothing that we haven't seen before.

Yes, while the film was playing I was wondering when this now common practice of indecipherable mumbling began. I think it was about 20 years ago. In films up to then it was a rarity to have an actor mouthing incomprehensible words. Now it seems like they are being told "Don't worry. Just say the line any old way and the mike will pick it up." They are wrong. It's just total indolence on the part of actor, director, sound engineer et al.
It might be thought that at my age (67) my hearing will be failing and giving me a problem that younger people may not have. That may well be true to some extent, though it doesn't explain why it's only in the cinema that I have problems in deciphering conversations at all. In everyday life, never. If in reality  people talked to me at the sound level I experience in contemporary films I'd be saying "Eh? What did you say?" all the time. But I never have to.

So I may be misjudging this by not having taken on board all one had been intended to take. But whereas yesterday's film was just plain daft and justified the low rating I gave it, with 'Transcendence' I'm willing to concede that at least part of the 'fault' may have been my own and that it's really a better film than I give it credit for. Having said that, it's still the case that a fair score which reflects my own level of 'enjoyment' would be..............3.5/10