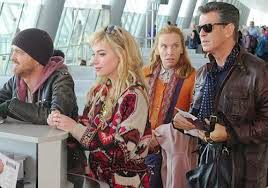 I'd heard that this might be something of a dud, but with the opportunity for a cheapo ticket nothing can deter me, particularly while the sublimity of 'Under the Skin' on my previous posting was still vivid in my mind. In the event, however, this film (Director: one Pascal Chaumiel) turned into a bit of an endurance test.

Based on a Nick Hornby novel (unread by me) it involves  four would-be suicides meeting by chance atop a tall London building on a New Year's Eve - and all, coincidentally (if you'll excuse the pun) with the same end in mind.

Pierce Brosnan, as a widely recognisable TV chat-show host, appears first and sets himself up for the drop. But as he steels his nerve, he's interrupted by the arrival of Toni Collette. Up to that point the film had promise. That was about three minutes in. From there onwards the film lives up to its title. Charging onto the scene is teenager Amanda Poots, all hyperactive and gobby as if she'd overdosed on Red Bull, and irritatingly world-savvy way beyond her years. Then the quartet is completed by bearded and slightly hunkish (and not unattractive) Aaron Paul. Naturally they all want to know why the others have made their choices. They postpone their final acts of desperation, signing a pact on a piece of paper that each will not consider carrying out their threats until at least the following Valentine's Day, six weeks away.
Poots is the daughter of a prominent politician (Sam Neill, whose heavyweight appearance also doesn't salvage the film) and it's not long before, with her own fame-through-daddy, coupled with that of the universally-known Brosnan, the story becomes public knowledge with the media demanding to know the whys. In order to escape the hullaballoo the foursome, now in a cosy, close-knit, little gang, jet off together for a break in the sun.
Toni Collette is far and away the most interesting of the group. She lives alone with her quadraplegic son, now a young man, and it was only for her that I could work up any care at all. Of course her situation is milked for sentiment for all its worth, complete with obligatory mood music. In fact throughout the film there are not only constant nudges on the film soundtrack pointing to the emotions one ought to be having (as though we are all infants needing to be spoon-fed!) but there is also - one of my betes-noires - snatches of songs (Gawd help us!) as much as three times, in addition to another one over the closing credits. Grrrrrrrr!!!

When the film wasn't irritating it was, frankly dull. (Much watch-checking!) And when it came to the end scenes, would you believe it, it turns out that life is worth living after all. Well, who would have thought it? (Cringe, cringe)

I might have guessed that this depiction of the lives of four people intending to top themselves would not have been all downbeat. But I had hoped that it wouldn't have been, by turns, quite so annoying and so boring.
To demonstrate that I can be generous here's a................................3/10