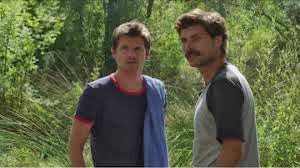 It's been a disgracefully long six months since I last saw a non-English language film, and considerably longer (several years) since the last one where being gay is an intrinsic part of its character(s), rather than sexuality being an immaterial, 'added-on' feature. Now they both come together in this film (director: Alain Guiroudie) - and, were it not for one particular aspect, which I'll spell out shortly, I'd class it as a 'corker'.

(I might mention that on IMDb at the moment one of the most prominent reviews submitted is completely damning, classing all the characters as losers and cannot understand why this film is being "championed by the gay community". He gives it a rating of 2/10. I shall not concur.)

Set only and entirely around a geographically unspecified lake where nude sunbathing in an informally recognised gay area takes place (all flaccid, by the way), together with cruising for casual sex in the adjacent foliage where both participators and voyeurs abound, this entirely male (nearly all of whom are gay) film tells of an unattached young man who starts visiting the locality and who, shortly after getting to know one or two of the regulars, witnesses (unnoticed from a distance) a murder take place. All the action happens over the ensuing few days (and dusk-times) where this chap, initially shaken by what he's seen, tries to mentally bury it, telling no one - (and this is where credibility is really stretched, my only complaint) - he not only responds to the physical advances of the murderer, admittedly with great apprehension initially, but actually strikes up a regular relationship with him. The perpetrator of the crime (an attractive 'bit of rough', I thought - right, above) does not know that he'd been seen and his new affair does not let on. As the relationship turns a bit less idyllic over the next few encounters the witness finds it harder to keep suppressed what he knows.
(Incidentally, at a couple of points there are, just for a few seconds, some hard-core action shots at which you may want to be prepared to avert your gaze).

A parallel strand of the story is when the witness guy also strikes up an unlikely friendship with a middle-aged chap who's started coming to this area, sitting in solitude after the break-up of his hetero relationship. There's no physical attraction between the two men, in fact this other guy is one of several seen in the film who has let his body go to the dogs, huge pot-belly and all. But they have a frank exchange of views on cruising, sexuality and the like.

We all know of these outdoor cruising areas, don't we? (ah, the memories!), and that side of it looks completely authentic, at least from my own experiences. But in this story, as I say, it does take a huge leap of faith to wonder how a witness to a shocking killing could, without too much protest, succumb to the charms of the murderer. I can only surmise that the desire of the flesh clouded and overwhelmed his judgment. But if you can look beyond this I do think you might agree with me that this is a superior film. Intensely atmospheric, with the blessing of having no music at all, it holds its tension throughout, culminating in a vicious final few minutes. (Maybe I also ought to add that the film's close will not satisfy those who demand a clear-cut ending).
As a piece of drama I admired it a lot - and it shows that you do not need more than a very modest budget to make an effective film.

Truth to tell, I had considered scoring this with an '8', but because of the aforementioned hole at the centre of the story, I cannot allow it onto such hallowed ground. But I have no hesitation in ultimately awarding it a silver medal's worth........................7.5