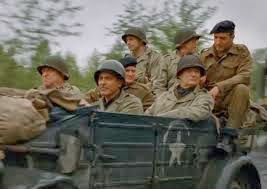 I'd been hoping that, not before time, this might at last be a film that I could say I liked. Alas, it was not to be.
It could have been.
An aspect of WWII which is hardly ever told, let alone widely known, about the attempted rescue of millions of pieces of art plundered from galleries, churches, private collections etc by the Nazis during their conquest of Europe.

Heading the team on this mission, to rescue as much as they can and to return the pieces from whence they were taken, is George Clooney (also the film's director and co-scriptwriter) with an assortment of recognisable names, mostly American, Bill Murray, John Goodman, Bob Balaban - and Matt Damon who, I read, was a stand-in for Daniel Craig who was forced to withdraw. Then there's Jean Dujardin and Hugh Bonneville, as well as Cate Blanchett who plays a sour and reluctant assistant to the Nazi invaders of her native Paris. (Shot of Eiffel Tower - caption: "Paris, France").
There should have been excitements aplenty but I found it all quite dull, not helped one bit by a curiously lacklustre and predictable script. Background music is, at times, obtrusive too. ("You can laugh.......now!").
The film sits uneasily between the seriousness of events going on around the central tale of salvaging art-works and a few isolated moments of uneasy humour. I didn't pick up that much enthusiasm appearing on screen from the cast either, seeming to treat it all as a perfunctory exercise.

So, one to forget, with the gnawing feeling that it ought to have been something a bit more special. If I see many more films before I catch something noteworthy I'll start to doubt whether my judgment has any credibility at all. But as it is, I can't give this one any more than.......................3.5/10
Posted by Raybeard at 08:37